Nothing Is True and Everything Is Possible 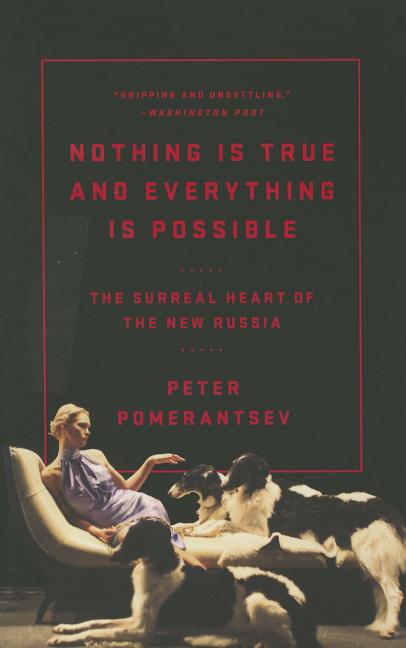 A journey into the glittering, surreal heart of 21st century Russia, where even dictatorship is a reality show. When British producer Peter Pomerantsev plunges into the booming Russian TV industry, he gains access to every nook and corrupt cranny of the country. It is a world erupting with new money and new power, changing so fast it breaks all sense of reality.

What The Reviewers Say
Rave Karen Dawisha,
The Wall Street Journal
Nothing Is True and Everything Is Possible, Mr. Pomeranstev’s sparkling collection of essays, takes us, as the subtitle promises, directly into 'the surreal heart of the new Russia.' Here are the country girls who pay thousands of dollars for courses on how to catch a millionaire and the oligarchs who pay millions to the Kremlin in order to become billionaires ... Mr. Pomerantsev’s focus is centrally on television and the Kremlin’s obsession with its own image, but the book—his first—also provides great insight into the inner life of Russia’s glitterati in Moscow and in London ... Readers looking for a book about Kremlin politics will not find it here. Key political actors are mainly not discussed, and Mr. Putin is a latter-day Godot, omnipresent but offstage ... In Russia today, Mr. Pomerantsev powerfully demonstrates, the Kremlin’s modus operandi is to keep everyone on tenterhooks, all too aware that 'it can grab us and pull us in at any moment.'
Read Full Review >>
Positive Tony Wood,
The Guardian (UK)
Nothing Is True and Everything Is Possible is an entertaining if at times bleak chronicle of these years, depicting a world 'where gangsters become artists, gold‑diggers quote Pushkin, Hells Angels hallucinate themselves as saints'. The cast of characters is so bizarre they must be real, from bearded nationalist bikers to self-help cultists and their supermodel victims ... This mercurial quality is part of what makes Putinism so elusive for its opponents – what exactly are they up against? – and Pomerantsev captures it well ... For Pomerantsev, the west’s willingness to accept the Russian elite’s money is the ominous sign of a 'slow patient co-optation' by the Kremlin. But one could equally argue the opposite: that many of the features he describes – the glamour and the graft, the vast gulf between haves and have-nots – are lingering symptoms of Russia’s own integration into a globalised neoliberal order, and that its many failings hold up a funhouse mirror to our own.
Read Full Review >>
Positive Miriam Elder,
The New York Times Book Review
Pomerantsev’s almost complete refusal to mention Putin’s name can be taken as a suggestion that we focus too much on him, that he’s so big he no longer requires discussion — or that we do not and cannot ever know who he truly is, so why even bother? ... Instead Pomerantsev focuses on a group of apparent outliers, using them to tell the story of today’s Russia ... Yet in Pomerantsev’s telling, they aren’t outliers at all; they’re characters playing parts in the Kremlin’s script ... despite its keen observations, what Pomerantsev’s book lacks is deep background for that audience. Readers of Nothing Is True and Everything Is Possible aren’t given a clear sense of why the Kremlin is deploying its propaganda so forcefully (does the author mean to imply, perhaps, that it’s simply a matter of power for power’s sake?) or of why Russians are so acquiescent. In a sense, this makes the book feel truly post-Soviet.
Read Full Review >>
See All Reviews >>
What did you think of Nothing Is True and Everything Is Possible?
© LitHub | Privacy