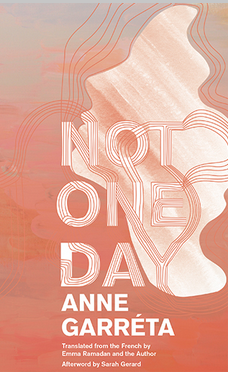 What The Reviewers Say
Positive Youmna Chlala,
BOMB
If the experimental French writing group Oulipo were to be reborn today, would they return as performance artists? Anne Garréta’s 2002 Prix Médicis–winning novel, Not One Day, marks her as a literary acrobat suspended between those who hold on to the group’s relevance and those who have let it go in favor of conceptual art practices. In this book, she transcends the conflict by insisting that desire can defy representation and undo form.
Read Full Review >>
Positive Sam Allingham,
Full Stop
This conflict between confession and textual interrogation organizes the book, and provides its intellectual torque. Though Garréta presents her fragments as 'the unwinding of memory,' they read more like discursive but nevertheless highly structured essays: meditations on particular kinds of desire, or philosophical investigations of how such desires might construct (or be constructed by) society ... The analytic aspect of Garréta’s writing is apt and incisive. Her essayistic style is complex but lucid and, for the most part, direct. She is particularly sharp about the societal structure of desire, especially queer desire ... The trouble, for Garréta, is that her structural understanding of the world — in which the only escape from such clichés is a highly refined aestheticism built around careful, formal decisions — risks reducing existence to nothing but an interplay of personal aesthetics. For all the book’s wit, intellectual heft, and incisive attitude towards a certain form of cerebral attraction, by the end one begins to detect a certain narrowness of scope. Most of these fragments take place within the cosmopolitan world of the international academy, in which highly intelligent people take the measure of one another, thrust and parry. This uniformity of setting (so many hotel bars, so many lingering sips of cognac), combined with a tendency towards quoting the French classics, creates an atmosphere of refined exhaustion, as if we were surveying the remnants of a party that has gone on a little long.
Read Full Review >>
Positive Lydia Perovi?,
Bookforum
Garréta is an Oulipian, therefore she proposes to abide by certain constraints: one remembered woman per day, five daytime hours at the computer, one resulting chapter. Yet in the final section we learn that the rules have been broken multiple times … When a woman enters Garréta's writing, the teller and the telling lose their bearings. And while the stories here suggest that Garréta is a top in real life, she is not interested in continuing the tradition of top writing that men maintain so diligently. (That only makes for automatons in a stock plot.) … Garréta is a dix-huitièmiste, an eighteenth-century scholar, and that century makes itself felt at many a turn. The eighteenth-century writing of desire is marked by knowingness and worldliness, a shrewd comedic tone that loses its dominance by the nineteenth century, when love hardens down to one other person and takes on the contours of tragedy.
Read Full Review >>
See All Reviews >>
SIMILAR BOOKS
Fiction

The Angel of Rome: And Other Stories
Jess Walter
Positive
What did you think of Not One Day?
© LitHub | Privacy