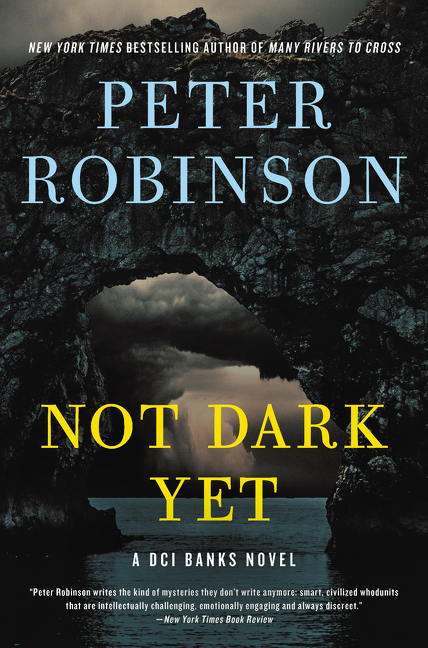 Investigating the murder of a property developer in Yorkshire, Detective Chief Inspector Alan Banks and his team begin scanning the victim's security tapes only to discover that a brutal second crime was also captured.

What The Reviewers Say
Rave Joe Hartlaub,
Bookreporter
This book — the 27th entry in the series — marks a number of personal passages for Banks, as well as the resolution of a couple of professional cases that have formed an extended story arc over several prior novels. Not Dark Yet is primarily and unsurprisingly driven by a murder investigation ... Longtime readers of the series will happily note that this installment, as well as those that have preceded it, is full of references to musicians and albums both obscure and nearly forgotten, forming a soundtrack for reading in the present and contemplating in the future. That Banks ultimately approves of his daughter’s new husband as the result of his musical taste made Not Dark Yet worth reading almost by itself. Robinson’s continued ability to reveal a mystery and a solution where you least expect it should make fans hopeful that this series will carry on for a while.
Read Full Review >>
Positive Janet Webb,
Criminal Element
The literary equivalent of the final act of a three-act play ... Revenge, along with the grip the past has on the present and future, underlies the events of Not Dark Yet ... The storylines are disjointed, particularly after Banks is forced to take medical leave. Banks is under intense pressure from internal investigators to spill the goods on Zelda. They clearly don’t believe a word of his story hence his superior protecting Banks by forcing him to stand down temporarily. Does that stop his investigations? Hardly. Not Dark Yet is an intense but ultimately satisfying conclusion to the intricate plots that took shape in Peter Robinson’s Careless Love.
Read Full Review >>
Positive Jane Murphy,
Booklist
Celebrated suspense writer Robinson returns with the latest in the long-running series starring Yorkshire DCI Alan Banks ... Fans will welcome this latest Banks adventure and revel in what Michael Connelly calls Robinson’s 'clear eye for the telling detail.'
Read Full Review >>
See All Reviews >>
SIMILAR BOOKS
Fiction

The Lamplighters
Emma Stonex
Rave
What did you think of Not Dark Yet?
© LitHub | Privacy