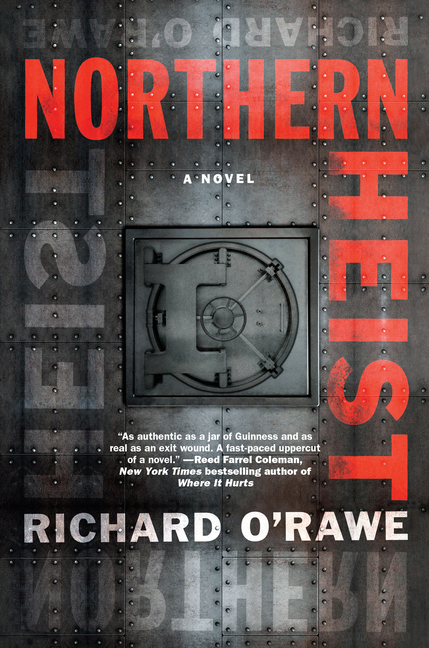 A thriller based on one of the biggest (and still unsolved) bank-robberies in history, written by a former IRA bank robber.

What The Reviewers Say
Rave Connal Parr,
The Irish Times (IRE)
... started life as a screenplay called Greed, which has been expanded out into this hugely impressive and skilfully crafted debut novel. It shifts between time and the perspectives of its unpropitious characters, through Big Houses on the Border, Dublin criminal underworlds, as well as Belfast’s new cityscapes, awakening out of the bitter grandeur of the old industrial city. Though it begins unpromisingly, with James 'Ructions' O’Hare assembling a team of criminals and/or former paramilitaries, its dialogue is sharp and venomous, boding well for the inevitable film it will morph back into ... O’Rawe writes stylishly without glamorising these men ... It feels we are being allowed to peer in on an old job. O’Rawe’s confidence as a storyteller takes off as the heist begins, dropping you in all kinds of damned places, with piercing echoes of Maurice Leitch’s merciless but pitch-perfect 1981 tale Silver’s City ... the novel we have been waiting for from one formerly involved in the Troubles. Here is a writer who has lifted himself out of the trench of communal politics recalibrated as literature, where every book, play or poem is a continuation of the struggle, the 'Brits' always the villains, a united Ireland always the end goal. It marks a step forward for Troubles protagonist literature (and, perhaps, Irish republicanism itself) by moving beyond it, confirming the arrival of a creative voice of note and potential.
Read Full Review >>
Rave Joe Hartlaub,
Bookreporter
... demonstrates a dark storytelling ability in the form of a piece of Emerald noir. It is an instant classic ... As it nears its conclusions, the book goes from being a dark, gritty work of suspense to a legal thriller where justice ultimately occurs outside of the courtroom. You might see one of the endings coming, but not all of them, yet you will not be able to stop reading just for the joy of seeing how they all happen ... O’Rawe takes what might have been in lesser hands a complicated topic --- the street politics of Belfast in the early 2000s --- and renders it comprehensible without sacrificing accuracy or emotion. The violence is explosive and the language is occasionally coarse, but neither prevents a bit of nobility and redemption to ultimately shine through, sometimes within the darkest of souls. Northern Heist may be O’Rawe’s first excursion into fiction, but hopefully it will not be his last, and I certainly wouldn’t mind revisiting the characters who make it to the end of this memorable tale.
Read Full Review >>
Positive Tom Nolan,
The Wall Street Journal
Northern Heist’s deeds and details, then, seem as real as a smashed kneecap, while its stopwatch tension, heightened by present-tense voice, is reminiscent of such classic caper films as Rififi and The Asphalt Jungle. The whole shebang—full of double- and triple-crosses and not without a rough sort of humor—culminates in two criminal trials (one of them IRA-hosted), each of which provides a different answer to O’Hare’s exasperated question: 'What has happened to honour amongst thieves?'
Read Full Review >>
See All Reviews >>
SIMILAR BOOKS
Fiction

Find You First
Linwood Barclay
Positive
What did you think of Northern Heist?
© LitHub | Privacy