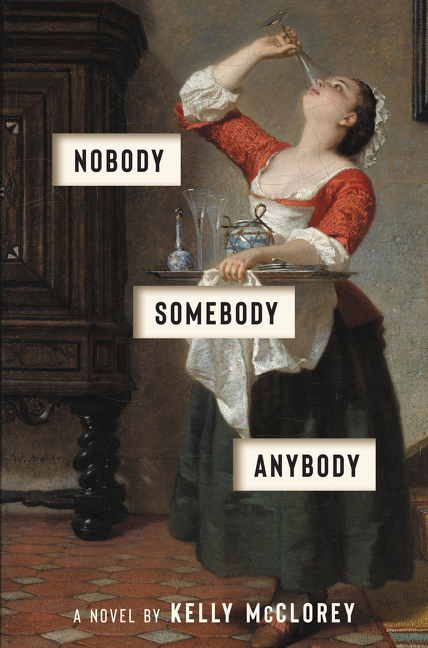 Booted from a selective college, Amy spends her summer working as a maid at a yacht club while waiting to take the exam—for the third time—to become an EMT. Isolated and anxious, Amy befriends her landlord and decides to try live by the "fake it 'til you make it" credo, pretending that she has all that she already desires in hope that her dreams will come true.

What The Reviewers Say
Rave D. W. White,
The Chicago Review of Books
... sparkling confident ... McClorey proves herself not only well aware, but fully in command of this elusive fictive element ... A startling and charming debut, the lifeblood of McClorey’s work is the expertly formed and controlled voice with which our protagonist relates her often humorous, subtly sad, narrative. The book has a utopian grander to it, a Confederacy of Dunces-esq cosmopolitan inventory that paints its players in bold relief...What’s more, McClorey has more than a trace of John Kennedy Toole’s uproarious plot making and brilliant craftsmanship to her, with interior and exterior dialogue that sings and descriptions that slice through the daily world ... As we move through the wonderfully strange yet brilliantly familiar events of Amy’s landmark summer, we learn about her tragicomic backstory via precise memory that never feels authorial or expository; instead each passage of Amy’s past—given in a manner that causes each to read like a coveted piece of a historical puzzle serves as an organic outgrowth of a natural scene, with McClorey’s smooth mechanics allowing her to seamlessly render her protagonist’s moves between fictive present and past. From page to page, across the whole, Nobody, Somebody, Anybody is a book that’s hard to decipher and harder to give up. It lends itself to long luxurious bouts of reading, propelled by its arresting worldview, unique voice, and quick pace. McClorey also manages a well balanced sense of readerly mystery, playing on that narrative-temporal location right up until the technically daring, utterly engrossing ending ... a finely calibrated book for its era, one that even—while feeling more fortuitous happenstance than anything—fits in a loose, thematic way with a pandemic-weary world ... McClorey proves herself more than capable in all aspects of the art of the novel—a rare feat for a freshman effort. With a singular voice, a carousing, quixotic, dauntless protagonist, rich and organic humor, the disarming, thought provoking ending, and above all, the current of sadness and depth of humanity that runs below the surface, time and again the reader finds themselves simply impressed ... From start to finish, here is the uncommon book that is supremely sure in conception, approach, and execution, and one that avoids trying to do too much—a common pitfall of the discursive first person. This last point should be interpreted as high praise:McClorey finds a razor sharp narrative focus and doesn’t allow her heroine to stray off course. By limiting her temporal range and perspective, McClorey is able to keep every scene charged with energy and importance, steering clear of those self-serious, overly introspective moments of expository reflection that often come with a first person narrative in which the act of the telling and the appearance of fictive events are distant in time. By keeping her narrating and narrative protagonists nearly one in the same, separated by only weeks, and with the former knowing little more than the latter, McCorley creates a central character of refreshing accessibility, vulnerability, and verisimilitude ... stands as a remarkable first novel, one that will stay with its reader and makes bold promises about the future career of its creator.
Read Full Review >>
Positive Suart Miller,
The Boston Globe
The book should appeal to fans of Gail Honeyman’s Eleanor Oliphant Is Completely Fine, but it is being touted as 'darkly comic,' which is a bit misleading. The only way to find most of Amy’s misadventures funny would be to laugh at her, which McClorey clearly doesn’t want. The incidents are entertaining without diminishing the raw truth of Amy’s turmoil and suffering ... A character making poor decisions and behaving badly is a requirement for dramatic conflict, but building a book—especially one written in the first person—around someone most readers would find uncomfortable to be around requires a deft touch. McClorey proves more than adept; even as you cringe at what Amy says or does, you’ll mostly just want to protect her from herself, to help guide her to the higher ground she seems so incapable of reaching ... (The secondary characters, with the exception of landlord Gary, are not fully fleshed out because Amy is so deep inside her own churning thoughts that she can’t see anyone as they are.) The novel is unnerving at times, simultaneously making us realize how egregious Amy’s mistakes are and how challenging it is for her just to navigate an ordinary day ... The book’s ending, which can perhaps be read in two ways, feels either too hopeless or, more likely, unearned. Either way, it seems rushed ... Still, it’s a moving story, well told, and Amy, who you might not want to spend time with in real life, will linger in your imagination long after the final pages.
Read Full Review >>
Positive Marie Solis,
The New York Time Book Review
This is an imperfect debut: Scenes drag, the dialogue is stilted. Amy’s back story doesn’t much help to explain why she does the things she does. Feeling optimistic about Gary, Amy thinks, 'We had our own story, and it was just as compelling as any other.' McClorey manages to capture the human desire to shape our lives with narratives — and how devastating it can be when reality departs from them.
Read Full Review >>
See All Reviews >>
SIMILAR BOOKS
Fiction

The World and All That It Holds
Aleksandar Hemon
Rave
What did you think of Nobody, Somebody, Anybody?
© LitHub | Privacy