No One Is Talking About This 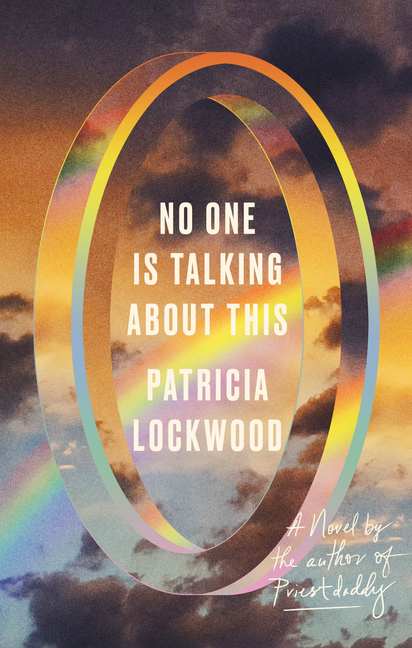 A woman who has recently been elevated to prominence for her social media posts travels around the world to meet her adoring fans. She is overwhelmed by navigating the new language and etiquette of what she terms the portal, where she grapples with an unshakable conviction that a vast chorus of voices is now dictating her thoughts. When existential threats begin to loom, she posts her way deeper into the portal's void. Suddenly, two texts from her mother pierce the fray: Something has gone wrong, and How soon can you get here?

What is this?
Positive
Based on 51 reviews

What The Reviewers Say
Rave Emily Bobrow,
The Wall Street Journal
Ms. Lockwood has a clear appreciation of what it means to be both of the internet and a witness to it. This tension—between the winking cynicism of social media and the seriousness of poetry; the alluring groupthink of online writing and the need to step outside it—is the main subject of her impressive debut novel ... This book is arranged as a list of fragmented scenes and observations, almost like poems, more thematic than linear. The effect, which should be familiar to readers of Maggie Nelson and Jenny Offill, here feels somewhat like a social-media feed in which big ideas and irreverent jokes jockey for (often diminishing margins of) attention ... Ms. Lockwood is a sharp and often funny social critic. She writes wisely of the emotionally labile landscape of the internet ... Ms. Lockwood is also good at capturing how the arch, performative, hyper-aware language of the internet can insidiously infiltrate how people act in real life ... Unlike Ms. Lockwood’s memoir, which she played fairly straight and often for laughs, the language here is heightened and poetic. This oblique approach sometimes compromises clarity, and the namelessness of the characters can get confusing. But many of her images are evocative and often beautiful ... More inventive than lapidary, Ms. Lockwood’s style is artful without being precious ... With this slim, bifurcated novel, Ms. Lockwood pulls off something unexpected. The two halves often feel like two different books, but the juxtaposition has a stealthy power. What begins as an ironical story about irony becomes an intimate and moving portrait of love and grief. In this way, a novel that had been toying with the digital surface of modern life finds the tender heart pumping away beneath it all.
Read Full Review >>
Positive Merve Emre,
The New York Times Book Review
Lockwood is a modern word witch, her writing splendid and sordid by turns. Her prose rambles from animal gags to dirty talk to infinitely beautiful meditations on the nature of perception that deflate and turn absurd before they can turn philosophical. She has honed her craft on the internet, mainly on Twitter ... No One Is Talking About This is, in part, a rebuttal to this vision of the internet as enabling a mean and cramped sort of art. The chief virtue of the novel is how it transforms all that is ugly and cheap about online culture — the obsession with junk media; the fragmentary and jerked presentation of content; the mockery, the snark; the postures, the polemics — into an experience of sublimity ... She is a restless narrator, who thinks in beautiful, witty, tidy paragraphs. She shifts between pronouns and points of view the way one might cycle between tabs late at night, half bored, half elated ... There is the 'you,' a direct message to the reader, at times solicitous, at times accusatory ... She emerges as a portal for the portal’s uncanny consciousness, churning individual thoughts into tweets, tweets into memes, memes back into the language of thought, until what belongs to me and what belongs to you can no longer be discerned amid this mute, incessant chatter ... Here is the novel’s secondary virtue: its insistence that the shadow forms of living and thinking — the life led online amid the buzz of the hive mind; the life that persists after death — are, for all their vaporous mystery, no less real than the life led by you or me ... For all the local beauty and humor of No One Is Talking About This, it does not feel like a good novel, exactly, because it does not feel like a novel at all.
Read Full Review >>
Rave Jordan Kisner,
The Atlantic
This is the experience—snort-laughter mixed with bewilder­ment at the absolute strangeness of the world in which I participate—that I tend to have when reading Patricia Lockwood, the poet turned memoirist and London Review of Books essayist who has now published her first novel ... The novel follows a protagonist who is 'extremely online,' a genius of the 'portal,' as the internet is called here, and naturally adept at the cleverness and absurdity of social-media exchange. She has become famous for it. Recently, she has gained worldwide recognition for a post that says, in its entirety, 'Can a dog be twins?' Her cat’s name is Dr. Butthole. She travels the world, invited to speak about the portal—both as an interpreter of its patterns and as a performer of its bizarre and hilarious argot ... What happens to a mind that has enthusiastically joined a worldwide Mind, yet can still occasionally see—if only in flashes—the perversity of the exercise? ... This kind of weird, slyly sophisticated humor, and a deep commitment to the profane as a tool for revelation and critique, are hallmarks of Lockwood’s style ... Lockwood’s affinity for the surreal, for baroque wit, for the sexually weird, for the inane and shocking has made her one of the most interesting writers of the past 10 years. It has also made her a master of Twitter ... it’s largely made up of brief, one-to-four-sentence increments, approximately tweet-length, rendered in super-close third person. These seem to have little relation to one another chronologically, and they don’t proceed logically. Instead, they are sporadic and self-contained: a joke, a story, a note, a question, a pithy comment. They pass the way social-media feeds pass ... The second half of the book, in which the narrator is newly deranged by the immovable reality of loving what must die—in addition to being deranged by the portal, which feels, by contrast, both eternal and editable—is electric with tenderness. Lockwood’s genius for irony is matched by the radiance of her reverence, when she lets it show ... Unusually for me, I wept through parts of this book, but in the best, beautiful-sad-music way—a grand success, the aliens would say.
Read Full Review >>
See All Reviews >>
SIMILAR BOOKS
Coming Soon

Cloud Cuckoo Land
Anthony Doerr
Positive
What did you think of No One Is Talking About This?
© LitHub | Privacy