No Knives in the Kitchens of This City 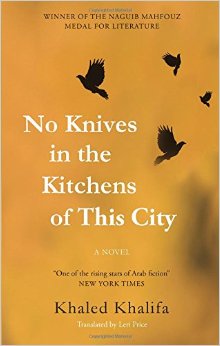 Winner of the Naguib Mahfouz medal for literature. In the once beautiful city of Aleppo, one Syrian family descends into tragedy and ruin. rrepressible Sawsan flirts with militias, the ruling party, and finally religion, seeking but never finding salvation. She and her siblings and mother are slowly choked in violence and decay, as their lives are plundered by a brutal regime.
Rave
Based on 3 reviews

What The Reviewers Say
Rave Robin Yassin-Kassab,
The Guardian
The novel follows a large, well-drawn cast – a family, their friends, enemies and lovers – back and forth across three generations. This multiple focus and enormous scope turns the setting, Aleppo, into the novel’s central character ... It is not surprising, in this context, that the characters are often depicted toiling hard to forget their desires, ugly compromises or snatches of happiness. But their willed forgetfulness contributes to the city’s destruction ... No Knives in the Kitchens of this City is intricately plotted, chronologically complicated and a pleasure to read. The profusion of characters defuses its narrative urgency, but gives it psychological and social depth. The writing is superb – a dense, luxurious realism pricked with surprising metaphors. It is lyrical, sensuous and so semantically rich that at times it resembles a prose poem, an effect occasionally marred by slightly clumsy translation. A sad but beautiful book, providing important human context to the escalating Syrian tragedy.
Read Full Review >>
Positive Jennifer Senior,
The New York Times
Khaled Khalifa writes about his native city with sensuality and an almost feral intensity in his new novel. The book focuses on just one family, and it stops several years short of the Syrian civil war. But it offers a glimpse into how terrified and empty of hope the people of a city must be to rise up in revolt. The future offers them nothing. It is a castle of closed doors ... no synopsis can give a sense of what reading this book is like. Mr. Khalifa’s story is episodic rather than linear; it is more about an atmosphere, both emotional and physical, than any defining event. The author writes in lush, pungent prose, some of it overripe, like a fermented banana. But some of it is also beautiful ... Mr. Khalifa is interested in erotic desire — and its repression. He lingers over it, conjuring some of the most graphic depictions of sex (in hotel rooms, in prisons, in the recesses of the imagination) I’ve read all year. No Knives in the Kitchens of This City meanders a great deal. At moments, it can be slow and hard to follow; its characters sometimes act in ways that make little sense, even by the erratic standards of human behavior in dictatorships. But the sights, smells and horror of living in Aleppo come pounding to life in this book.
Read Full Review >>
Rave David L. Ulin,
The Barnes & Noble Review
...magnificent ... a central motif is the circularity of time. Khalifa encodes such a sensibility into his work by shifting back and forth across the decades, slipping from character to character with a fluid, even dreamlike grace ... All of this comes to us by way of a narrative that loops and circles, doubling and tripling back on itself...The novel, though, is never uncentered or disconnected, thanks to the relationship between its characters and Aleppo, which Khalifa brings to life in its own right ... In the struggle to survive, such things get put aside or hidden, a set of vulnerabilities too dangerous to reveal. Khalifa calls it the parallel life, 'a truth circulated in secret,' in which 'everything in our memory had to be erased and its burdens thrown away.' And yet, how do we live without memory? How do we remain who we are? If No Knives in the Kitchens of This City has anything to tell us, it’s that these are the questions to which we must pay attention — both for Aleppo and ourselves.
Read Full Review >>
See All Reviews >>
SIMILAR BOOKS
Fiction

The Chinese Groove
Kathryn Ma
Rave
What did you think of No Knives in the Kitchens of This City?
© LitHub | Privacy