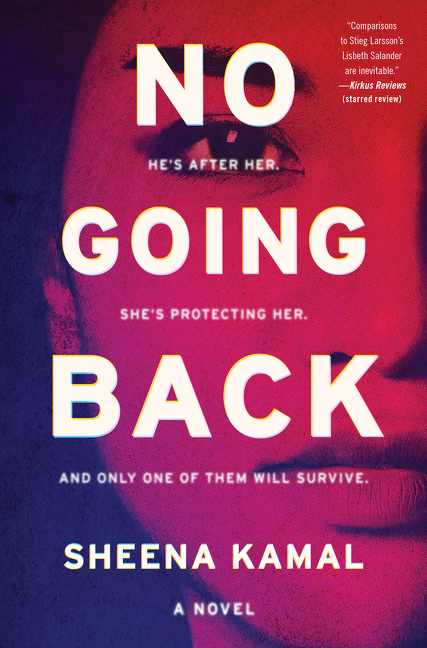 In the third novel in Kamal's series, Nora Watts must rescue the daughter she long ago gave up for adoption from the malicious Dao, the underworld figure trying to ruin Watts's life.

What The Reviewers Say
Positive Elisabeth Woronzoff,
PopMatters
Whereas the novel is listed as a mystery, there are no red herrings as Dao is the disputable antagonist. Kamal unfurls a thrilling plot inundated with tense action personified by a dynamic, albeit flawed, female protagonist ... Kamal's novel utilizes crime-noir tropes but with purposeful deviations ... The crime noir genre became a popular form of escapism during the Great Depression, then resurged in the Nixon era. Crime noir's characters operate outside mainstream society. Their discontent and rejection of authority are subversive in a way that's impossible on a daily basis. It makes sense that Kamal revives the genre for this contemporary moment ... No Going Back's characters are primarily people of color, with several identifying as queer. In Kamal's hands, her characters no longer reflect societal taboos but are affirming individuals who's literary presence challenges systematic whiteness ... Whereas No Going Back is a successful thriller, Kamal takes two-thirds of the narrative to build the tension. It can be said this is the marker of a slow-burner. But her reliance on minuscule detail decelerates the storyline. The quantity of secondary and tertiary characters muddies the story while burdening the pace. The sheer quantity of characters engendering the billionaire criminal archetype is tedious ... readable as a standalone text, but a series reading would certainly mediate the novel's inconsistencies ... an engaging psychological thriller. Kamal's writing is canny. Her avoidance of an ahistorical crime-noir retelling is praiseworthy. Hopefully, this isn't Nora's finalé, as she will undoubtedly continue to beguile and intrigue.
Read Full Review >>
Positive Henrietta Verma,
Booklist
The book quickly hits top gear, with Nora alternately leaning on friends and associates and braving danger alone to fight for Bonnie, not to mention to save herself. Some of the male characters aren’t greatly distinguished from each other here, but the action is the draw, and it doesn’t let up. Fans of thrillers starring strong women will enjoy this Vancouver-set story of love facing down evil.
Read Full Review >>
Rave Publishers Weekly
Vivid descriptions of Devon complement a compelling mystery, which builds to a dramatic conclusion. Even nondog lovers will eagerly await the next installment featuring Taz and his handler.
Read Full Review >>
See All Reviews >>
SIMILAR BOOKS
Fiction

The Devil Takes You Home
Gabino Iglesias
Positive
What did you think of No Going Back?
© LitHub | Privacy