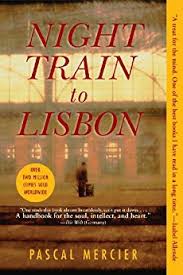 In Pascal Mercier's third book, a gifted but dull 57-year-old classical languages teacher in Switzerland decides to venture on a life-changing journey after a chance encounter with a random woman and a captivating book.

What The Reviewers Say
Mixed Liesl Schillinger,
The New York Times Book Review
...Pascal Mercier’s Night Train to Lisbon delves into the question of national and personal identity, contains a text within a novel and explicitly invokes the tale of Odysseus and his 20-year journey through pain toward self-knowledge ... Mercier has built his plot on escapist fantasy, and put the Portuguese dictator Antonio Salazar’s authoritarian regime at the core of his inquiry ... Mercier’s hero is a dried-up Swiss classics teacher, Raimund (Mundus) Gregorius, whose late-life crisis begins when he encounters a distraught Portuguese woman on a bridge in Bern. Ditching his classroom, Gregorius takes off for Lisbon...wording is so dense and overwrought, and Barbara Harshav’s translation so ham-handed, that unpacking each sentence is like decoding a cryptic crossword in hieroglyphs ...struggles with the philosophical task of creating an authentic self in the absence of available role models.
Read Full Review >>
Positive Jonathan Yardley,
The Washington Post
One problem with Night Train to Lisbon is that its plot, if plot is the word for it, consists almost entirely of talk — talk, talk, talk — about people and events in the past. The effect of this endless conversation is numbing rather than stimulating ...it's never really clear here whether the central story belongs to Gregorius or to Prado, and there's scarcely a hint of dramatic tension as Gregorius stumbles his way toward what he learns about Prado ...his fiction offers the kind of intellectual puzzles and trickery that many readers love in the work of Umberto Eco, but there are no such pleasures to be found here ... Night Train to Lisbon never engages the reader, in particular never makes the reader care about Gregorius. It's an intelligent book, all right, but there's barely a breath of life in it.
Read Full Review >>
Mixed Francis X. Rocco,
The Wall Street Journal
A middle-aged Swiss high-school teacher browsing in a second-hand bookshop comes across a collection of essays by a writer he has never heard of, in a language (Portuguese) he has never studied ... Such is the conceit that propels Night Train to Lisbon, an ambitious novel by Pascal Mercier...makes literary hero-worship a kind of theme, showing it to be, by turns, an intellectual quest, an act of self-discovery and, in the case of his earnest main character, a disturbing obsession ... Readers may feel exhaustion more than enlightenment ...Gregorius is simply too dull to inspire much concern. The already slow narrative breaks periodically for generous quotations from Prado's prose... The idea of stepping into the world of a beloved book and virtually inhabiting the life of its author is a seductive one. But Night Train to Lisbon is not likely to stir such longings.
Read Full Review >>
See All Reviews >>
SIMILAR BOOKS
Coming Soon

The Harpy
Megan Hunter
Positive
What did you think of Night Train to Lisbon?
© LitHub | Privacy