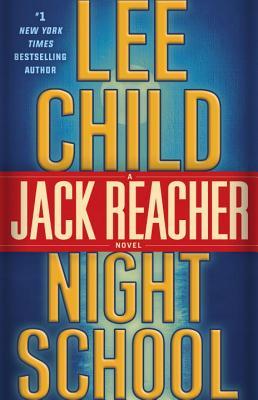 The latest novel in Lee Child's best-selling Jack Reacher series; a prequel set in 1996 when Reacher is still in the army.

What The Reviewers Say
Rave Patrick Anderson,
The Washington Post
What makes Night School the best of the Reacher novels I’ve read is that Child has concocted a brilliant plot ... Child portrays bodies in action memorably...The details of the search are ingenious, the outcome makes sense and the writing is smart and surprising. This is one of the best thrillers you’ll read this year.
Read Full Review >>
Positive Janet Maslin,
The New York Times
...while it’s surprising to find him as part of a group in this book, the changeup works. Unlike most Reacher books, which start at breathless velocity and then wind up having to work through huge, empty action scenes later, this one gets better as it goes along. Its complexity pays off with a better than usual MacGuffin and real teamwork against a global enemy ... the choices he’s made for Night School are smart ones.
Read Full Review >>
Mixed Charles Finch,
The New York Times Book Review
...for 100 pages or so the book careens forward, drawing the death of a local prostitute and a group of German nationalists into its engaging search. There, however, it stumbles. Child gives away too much, too soon, a rare unforced error for this series, and more significantly Reacher seems strangely out of place in a military investigation ... When he’s battling a corrupt private military firm, the terse, forceful prose with which Child describes him serves to confirm Reacher’s toughness and credibility. But when he’s battling a jihadist group, that same tone seems like little more than a shrewder variety of fakeness, a subtler posturing.
Read Full Review >>
See All Reviews >>
SIMILAR BOOKS
Fiction

The Transparency of Time
Leonardo Padura
Rave
What did you think of Night School?
© LitHub | Privacy