Nietzsche and the Burbs 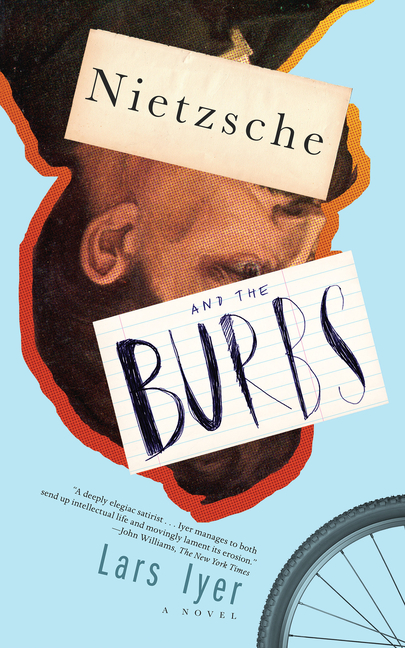 When a new student transfers in from a posh private school, he falls in with a group of like-minded suburban stoners, artists, and outcasts—too smart and creative for their own good. His classmates nickname their new friend Nietzsche (for his braininess and bleak outlook on life) and decide he must be the frontman of their metal band, now christened Nietzsche and the Burbs.

What The Reviewers Say
Rave Michael Schaub,
NPR
... delightful ... a hilarious book that also manages to be a genuinely moving look at the end of adolescence ... isn't a plot-heavy novel; it's more of a character study told through a series of darkly funny conversations among the four friends (and, to a lesser extent, Nietzsche, who doesn't talk much). That's not to say it's boring at all — Iyer's dialogue is so funny, and rings so true, that it's something of a challenge not to read the whole thing in a single sitting ... Disgruntled teenagers are famously hard to know, but Iyer depicts them accurately and with a real sensitivity, never mocking or condescending to them. He captures their adolescent bravado beautifully ... Crucially, though, he also captures the moments when they let their guard down, when they forget to be disaffected for a few minutes and open themselves up to happiness ... observant, funny and compassionate. It's obvious that he loves his characters, and his enthusiasm for them is contagious — it's impossible not to root for these hard-edged but sweet kids, even as they practically beg you to disdain them. Nietzsche and the Burbs is an anthem for young misfits and a hilarious, triumphant book about friendship.
Read Full Review >>
Rave Scott Neuffer,
Shelf Awareness
... Iyer makes nihilist philosophy hip and fun in his highly entertaining tragicomedy ... Iyer writes in short, emphatic elliptical sentences, a little maddening in their repetition but effective in creating a mood of rebellious adolescence. The style works in portraying the young characters' molten thoughts and emotions, as well as in satirizing the suburbs and school life ... As much fun as Iyer has in hilariously sending up tract houses and golf courses, he's at his satirical best describing the social stratification in the school ... There's something daring and poetic in the main characters' resistance to suburban culture ... The characters don't just talk philosophy; they embody it in their decisions and actions. They test their surroundings with radical ideas. It's an exhilarating ride, evoking the grandiosity of youth and the dynamics of counterculture itself. Of course, there's a tragic arc to the story. Beneath every uproarious protest cry is something human and fallible, Iyer sharply reminds readers ... The brilliant, relentless drive of the narrative of Nietzsche and the Burbs demands a certain amount of stamina from readers. But the payoff is great. Perhaps not since Don DeLillo's White Noise has a novel so funnily and savagely lifted the veil on Western postmodern culture. What's underneath is hard to explain. Some may find darkness, others beauty.
Read Full Review >>
Mixed Leo Robson,
The Guardian (UK)
Lars Iyer’s follow-up to the celebrated Wittgenstein Jr is another attempt to treat his erstwhile academic specialism, European philosophy, as the basis for deadpan observational comedy ... The result is certainly creditable—vivid, tickling and spry. It’s also remarkably unkempt ... Iyer is eager to exploit the rich opportunities for comic juxtaposition ... But Iyer also sees past putative incongruities to something continuous or mutually illuminating ... a strange process occurs whereby something that looks like shorthand—a bit of thumbnail scene-setting—soon gives way to obsessive completism. The threat of prose-poetry often hovers and doesn’t always dissipate ... What’s frustrating about these local tendencies is that the novel is also distinguished by genuine conceptual compactness. Iyer makes light work of exploring the ways in which a 19th-century German philosopher, or his present-day descendant and doppelganger, would and wouldn’t feel right at home in the home counties. But his tendency to make the reader live that reality, in all its blog-friendly and italics-worthy drabness, seems less like a crucial part of the project—intentional immersiveness, perhaps, or self-conscious garrulity— than a straightforward failure of craft.
Read Full Review >>
See All Reviews >>
SIMILAR BOOKS
Fiction

Mona at Sea
Elizabeth Gonzalez James
Positive
What did you think of Nietzsche and the Burbs?
© LitHub | Privacy