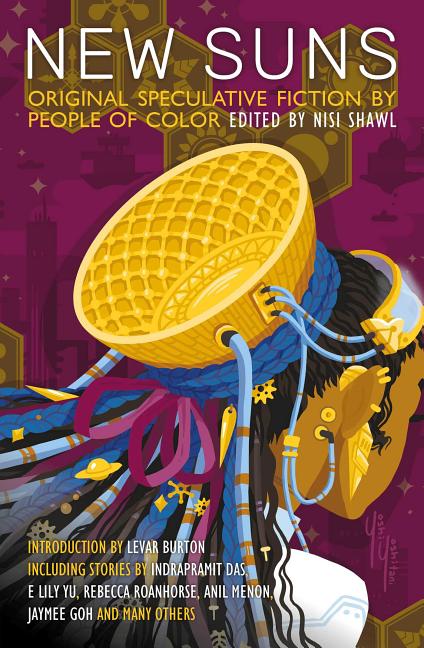 "There’s nothing new under the sun, but there are new suns,” proclaimed Octavia E Butler. New Suns: Original Speculative Fiction by People of Color showcases emerging and seasoned writers of many races telling stories filled with shocking delights, powerful visions of the familiar made strange. These are authors aware of our many possible pasts and futures, authors freed of stereotypes and clichés, writing outside of what has come before.

What The Reviewers Say
Rave John Rieder,
The Los Angeles Review of Books
New SunsNew Suns hammers home anything programmatic about the role played by people of color in shaping contemporary speculative fiction. The work gathered here is much more striking by virtue of its generic and tonal diversity than by any commonality that might be based upon the fact that all of it has been produced by nonwhite authors ... This is not to say that there is no trace of the nonwhite positionality of the authors in the contents of the anthology, but it has less to do with what isM/em> there than with what is not: any hint of celebratory fantasies of exploration, colonization, or conquest ... Get hold of this excellent anthology. You won’t regret it.
Read Full Review >>
Positive Mahvesh Murad,
Tor
Though New Suns is simply presented as an anthology of short fiction by people of colour, without any over arching theme, a great many of the stories in the collection focus on what it means to be the other—or become the other. But of course they do. This comes as no surprise, though some readers may be slightly disappointed when many of the stories don’t quite push at this enough, holding back just that little bit that stops from deeper exploration of their narrative. For some, it is that the short story format isn’t quite long enough to explore what they’re thinking (and so some of the stories come across as excerpts, which isn’t necessarily a negative aspect). For some it’s just a matter of undeveloped skill at addressing heavier, more complicated themes in equally complicated settings. Regardless, New Suns is an earnest compilation of voices from many ethnicities and backgrounds, making it a nice little package for those looking to read the narratives of writers exploring their experiences as people of colour, and as marginalised people .
Read Full Review >>
Positive Cynthia C. Scott,
Strange Horizons
New Suns embraces diversity in more than name only. The breadth of stories featured here is quite stunning: they explore race, gender, sexual orientation, and culture; there is literally something here for everyone. Not all of the stories, however, are equal in strength and readers more interested in SF than fantasy might be disappointed with the dearth of relevant selections here. Yet, like most anthologies, all this comes down to personal taste, and Shawl has done an admirable job of curating stories that cover a broad overview of writers of color working in the genre ... If there is one overriding theme that runs throughout the anthology, it is the search of the marginalized for empowerment in worlds that limit their dreams and imaginations. Not all of the stories in this anthology might be equally powerful or appealing to everyone, but readers can appreciate the ways in which New Suns does more than offer a diverse group of writers of color from different backgrounds: it also offers a diversity of the futures that can be possible in the speculative canon.
Read Full Review >>
See All Reviews >>
What did you think of New Suns: Original Speculative Fiction by People of Color?
© LitHub | Privacy