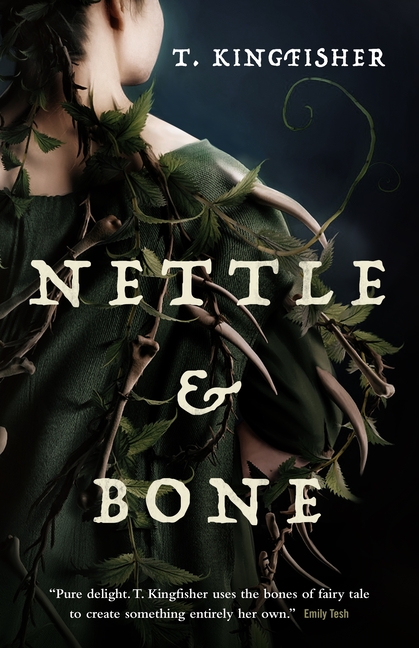 Marra never wanted to be a hero. As the shy, convent-raised, third-born daughter, she escaped the traditional fate of princesses, to be married away for the sake of an uncaring throne. But her sister wasn't so fortunate—and after years of silence, Marra is done watching her suffer at the hands of a powerful and abusive prince. Seeking help for her rescue mission, Marra is offered the tools she needs, but only if she can complete three seemingly impossible tasks.

What The Reviewers Say
Rave CAITLYN PAXSON,
NPR
This is an adult fantasy novel — all the characters are over 30 — but it reads like the fantasy novels I devoured when I was a teen, in the days of yore before YA was a thing. It reminds me of the series of fairytale retellings edited by Terri Windling and Ellen Datlow in the 1980s and 90s (which set the standard for this fantasy sub-genre), only rather than cleaving closely to one specific fairytale as a template, Nettle & Bone treats its source material like a buffet ... The beauty of it all is that even while paying homage to the tropes I know and love from growing up on a steady diet of Brothers Grimm, English balladry, and French literary fairytales, Nettle & Bone carefully subverts them as well ... As much as I loved Nettle & Bone, I did have a little trouble getting immersed in the opening chapter ... rounds up all the secondary (and let's face it, more interesting) characters of fantasy lore and gives them the chance to save the day on their own terms. I have no doubt I will return to it often when I'm in the mood for a fractured fariytale.
Read Full Review >>
Rave Shinjini,
The Chicago Review of Books
The author’s métier is at play in creating a humorous tone to explore the magic and its effects. Humor is thus produced as a calculated move between surprise at and acceptance of this world, which only takes place due to a tension between the minority cultures and the so-called hegemonic normal ... I found it appropriate that the narrative also depicts, in unflattering but generous detail, the tyrant as expressing himself through threats and tantrums, the witch as a benevolent grouch, even the fairy godmother as being a kind old woman who sometimes bestows murderous curses. These details are not so much inversions or subversions of the archetypes, as much as they are interpretations. Fairy tales are vastly malleable, and it must be remembered that the violence and transgression inherent in fairy tales has too often been sanitized for our consumption. I interpret Nettle & Bone’s fairy tale as a narrative about magic that is extraneous, present but absolutely insignificant without the human intention and action to produce the effect. As such, it’s T. Kingfisher’s characters and their motivations that take the stage; without their decisions and motivations, nothing really can happen ... And while the characters are sometimes too kind and too naïve, and the climax is a little too easily accomplished, much in the manner of most adventure narratives—I was enamored by Nettle & Bone because it allowed its characters to be contradictory. I could easily ignore its tendency to repeat its punchlines or reduce the nature of malevolent evil as it made room for the necessity of action.
Read Full Review >>
Rave Jaclyn Fulwood,
Shelf Awareness
... clever and bold-hearted ... Marra's hard-fought journey from third-string princess to hero will delight fantasy readers. Kingfisher's signature offbeat humor remains as entertaining as ever, and her treatment of domestic abuse is filled with compassion and dignity. This rollicking feminist fairy tale is filled with redemption, community and courage, its dark passages the road to a satisfyingly uplifting endgame.
Read Full Review >>
See All Reviews >>
SIMILAR BOOKS
Coming Soon

The World We Make
N. K. Jemisin
Positive
What did you think of Nettle & Bone?
© LitHub | Privacy