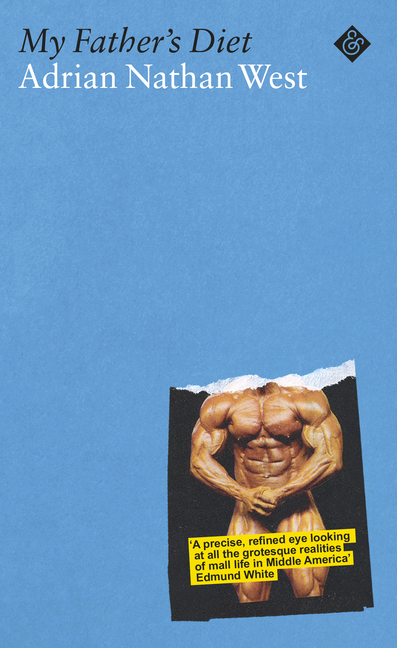 When another in a long line of his father’s boozy relationships falls apart, something changes. He wants to have a chat with his boy. The son fully expects to be talking his dad out of committing suicide, but no: the old man has other plans for his carcass. He has, in fact, entered a bodybuilding competition, and wants his son’s help to get fit. If the alternative is despair, how can the son refuse?

What The Reviewers Say
Rave Jeremy Lybarger,
4Columns
Where other authors might opt for satire, West instead delivers a kind of highly wrought kitsch realism that implicates everyone, including the narrator. His style’s mingled tenderness and grotesquerie can sometimes read like a distant cousin to Winesburg, Ohio ... The competition distills all of the novel’s other themes, particularly the idea that changing your body, your attitude, or your surroundings will somehow change your life. Americans’ faith in self-reinvention—a faith that is now itself a commodity—is the final punchline.
Read Full Review >>
Rave Sam Sacks,
The Wall Street Journal
This debut offers an acute, painfully funny front-row view of a midlife crisis in action. Mr. West writes in the vein of what has been called dirty realism, bringing style and erudition to the subject of Middle American drudgery. Unfurnished apartments, tacky mall restaurants and public buses are all depicted in unflattering close-ups ... Under the microscope are the strange habits of men who are incapable of discussing their emotions with one another yet constantly reveal them in the most tortured, vulnerable ways. The narrator’s father, ridiculous and resilient, is a desperately touching character and I was anxious for the book to not make too much fun of him. Apart from a misbegotten final sentence, it doesn’t—Mr. West is unsparing but tender. His narrator is also a man, after all, yearning for love but with no idea how to ask for it.
Read Full Review >>
Rave Christopher Shrimpton,
The Guardian (UK)
... slim, sad, comic and sharply observed ... The minor characters are eye-catching, too ... West, a superb translator by profession – his translation of When We Cease to Understand the World by Benjamín Labatut was shortlisted for the International Booker prize – writes surgically precise prose. The young man notes his father’s verbal quirks and describes his peculiar gait with the detachment of a doctor examining his patient ... West’s achievement, in this subtle and delightful book, is to have rendered failure in strikingly handsome terms.
Read Full Review >>
See All Reviews >>
SIMILAR BOOKS
Coming Soon

Cult Classic
Sloane Crosley
Rave
What did you think of My Father's Diet?
© LitHub | Privacy