My Father Left Me Ireland 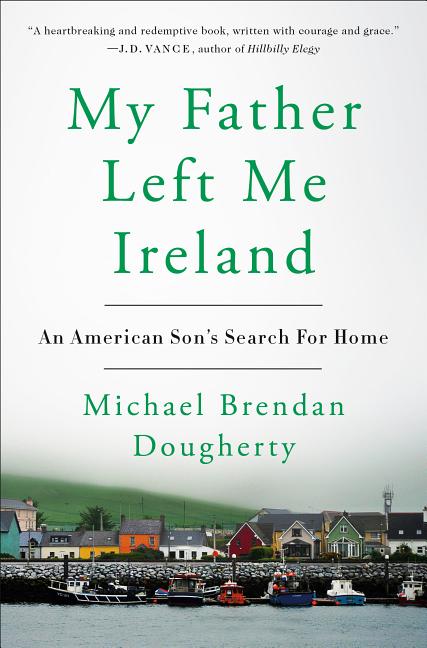 The child of an Irish man and an Irish-American woman who split up before he was born, Michael Brendan Dougherty grew up with an acute sense of absence. Years later, when Michael found out that he would soon be a father himself, he could no longer afford to be jaded; he would need to tell his daughter who she is and where she comes from. He immediately re-immersed himself in the biographies of firebrands like Patrick Pearse and studied the Irish language. And he decided to reconnect with the man who had left him behind, and the nation just over the horizon. He began writing letters to his father about what he remembered, missed, and longed for. Those letters would become this book.

What The Reviewers Say
Mixed Crawford Gribben,
The Wall Street Journal
...an eloquent meditation ... So far, so conservative. But My Father Left Me Ireland makes some very unexpected moves ... The paradoxical combination of revolutionary politics and conservative nostalgia makes My Father Left Me Ireland a profoundly American book. Mr. Dougherty’s writing grasps toward a stable, contented monoculture, speaking more clearly to the concerns of conservative intellectuals during the Trump administration than it does to an Ireland today moving as fast as possible to shake off reactionary views. Mr. Dougherty’s father may have left him Ireland, but, as this book suggests, it is no longer clear what Ireland represents. My Father Left Me Ireland addresses a problem as much as it posits a solution. For, this book reminds us, belonging is always bricolage. It may be easier to find a father than to find a fatherland.
Read Full Review >>
Positive Kyle Smith,
The National Review
...a brief, beautiful, deeply felt [book], saturated with meaning ... Michael rejects most of the assumptions of our modern consumerist condition and hence rejects its defining registers of hipness and irony. Instead he lays bare his emotions, the yearning he felt growing up with a single mom ... Michael’s welter of feelings about his ancestry and his father are the basis of this book ... Michael doesn’t so much argue as feel that some combination of materialism, technocracy, and individualism is carrying us away from our purpose. He finds his in his faith, his family, his Irishness, his determination to be conscious of past, present, and future.
Read Full Review >>
Positive Peter Quinn,
The Irish Times (UK)
... self-analysis is done with frankness and pathos. But at points autobiography swells into cranky generalisations ... Sometimes it would be better – and humbler – to use I rather than we ... poignant eloquence and emotional honesty.
Read Full Review >>
See All Reviews >>
What did you think of My Father Left Me Ireland?
© LitHub | Privacy