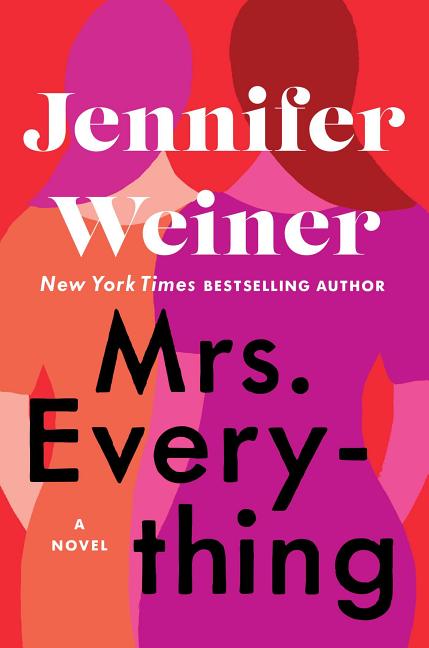 Jo and Bethie Kaufman may be sisters, but they don’t have much else in common. As young girls in the 1950s, Jo is a tomboy who’s uninterested in clothes while Bethie is the 'pretty one' who loves to dress up. When their father dies unexpectedly, the Kaufman daughters and their mother, Sarah, suddenly have to learn how to take care of themselves at a time when women have few options. A sprawling story about two sisters growing up, apart, and back together.

What The Reviewers Say
Rave Susan Maguire,
Booklist
In chronicling seven decades of the Jewish sisters’ lives, Weiner...asks big questions about how society treats women in this slyly funny, absolutely engrossing novel that is simultaneously epic and intimate. Jo and Bethie’s relationship eschews cliché in favor of the more mundane—and more powerful—reality that closeness ebbs and flows, and sometimes each sister is on her own to figure it out ... It’s been a while since Weiner explored the complicated terrain of sisterhood, and readers will flock to this ambitious, nearly flawless novel.
Read Full Review >>
Mixed Sarah McCraw Crow,
BookPage
With its long timespan and its focus on cultural change, Mrs. Everything is a departure for Weiner, a founding godmother of fun, fluffy, women-centric popular fiction ... Mrs. Everything’s flawed but approachable female characters, well-examined friendships and romantic relationships and often-joyful sex scenes make this vintage Weiner ... some details and secondary characters are skated over, and some sections feel rushed. Still, this is a warm, readable novel about figuring out what it means for a woman to be true to herself.
Read Full Review >>
Mixed Kristi Elizabeth,
The Seattle Review of Books
Being a fan of [Weiner's] previous works, I was excited to dig in and become engrossed. Instead, I found myself counting the pages until I was finished ... The beginning started out well...Her adventures and the relationships she has are interesting and dynamic ... The middle of the story is where I started drifting off. It became a little boring and I had to reread some of what happened. Then the story picks up again at the end with a wonderful, heartwarming, and satisfying ending. I would love to see this book be condensed. Also, although I realize the author is trying to get the point of women’s rights across and point out how far women have come, I found the insertion of Hillary Clinton’s name into the book two or three times was unnecessary as well.
Read Full Review >>
See All Reviews >>
SIMILAR BOOKS
Fiction

The Chinese Groove
Kathryn Ma
Rave
What did you think of Mrs. Everything?
© LitHub | Privacy