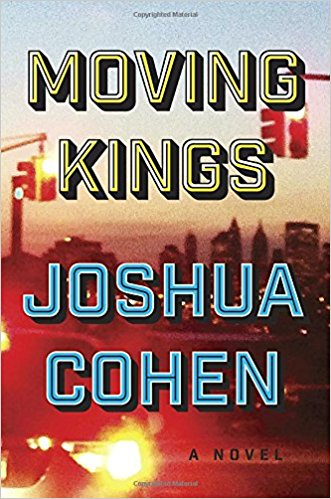 A novel in which two young veterans of the last Gaza War come to Brooklyn to work for a cousin's moving company for a year. Moving Kings interweaves the housing crisis in America’s poor black and Hispanic neighborhoods with the world's oldest conflict, in the Middle East.

What The Reviewers Say
Rave Mark Athitakis,
The Los Angeles Times
...a brilliant book whose brilliance comes via a bait and switch. It opens as a comic portrait of a midlife crisis, but concludes as a somber cautionary tale frothing with cataclysms, including fire and gunplay ... It comes on as unassuming yet stylish, but circles around tricky questions of occupation and power in the U.S. and Israel. And yet none of it feels messy or overreaching — indeed, it feels master-planned to slowly unsettle your convictions, as the best novels do ... Cohen has a brain-on-fire intellect and a Balzac-grade enthusiasm for understanding varieties of experience, which encourages the reader to stick with his provocations ... Americans and Israelis may not be engaged in the same conflict, but they share a similar challenge in solving complicated questions of faith, race and the law. Cohen’s book is a comic and harrowing study of the consequences of ignoring them.
Read Full Review >>
Mixed Ben Purkert,
The Rumpus
Cohen writes compellingly about the Jewish experience. The first sections of Moving Kings focus on David and Yoav—the book’s best-drawn characters—and occasionally arrive at gripping moments of emotional sincerity ... Cohen, however, is not simply after shock value. His novel is more interested in horrors suppressed than luridly described, particularly in the case of war-hardened Yoav and Uri. The gruesome details from their military service go unmentioned, and thus become more haunting ... He gets into trouble, though, when he strays from the terrain he knows best. Written in close third-person narration, Cohen’s novel is masterful at capturing the voices of the people who work for Moving Kings; when the focus shifts to the victims of eviction, the writing loses credibility ... Moving Kings is a bold novel that succeeds in many ways. It has brilliant things to say about America and Israel, war and peace, diaspora and home. But it can’t convince us that the person at the center of its eviction narrative is real. Making a character live and breathe on the page tests a writer’s imaginative capabilities, but it’s also about investing in the humanity of the subject. Moving Kings could have engaged more deeply with its evictee, rather than dragging him away.
Read Full Review >>
Rave Ron Charles,
The Washington Post
Granta recently named Cohen one of the best young American novelists, and his new book, Moving Kings, is a svelte comic triumph that concentrates his genius ... The clash of expectations between a rough American businessman and an Israeli innocent abroad provides the basis for some smart comedy, and Cohen is particular adept with moments of silly absurdity ... As subtly as water seeps into sand, the comedy drains from this story, and we’re left in the stark moral desert where Yoav is stranded.
Read Full Review >>
See All Reviews >>
SIMILAR BOOKS
Fiction