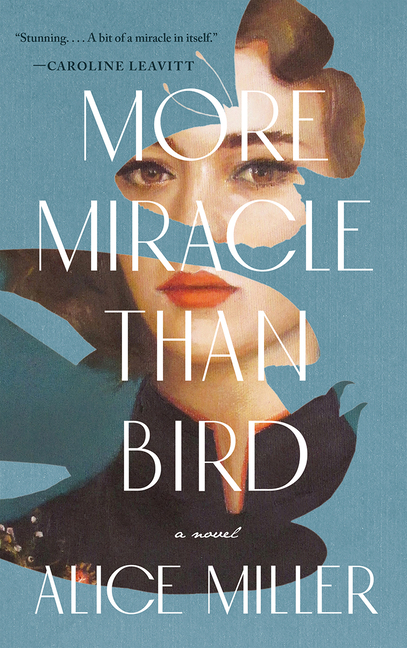 Charts the love story of two of literature’s most fascinating characters: Georgie Hyde-Lees and her husband, W. B. Yeats.

What The Reviewers Say
Positive Dana Hansen,
The Chicago Review of Books
The goal of these books is laudable, and the material certainly rich ... earnest ... Miller quite deftly reveals Yeats’s shabby character ... Miller’s characterization of her protagonist as a flawed and contradictory being is effective: we both admire Georgie’s resolve and find her unbearably foolish and even contemptible in her naivety ... There is much to recommend about More Miracle Than Bird, despite some slow moments in the plot, over-description, and occasionally stiff dialogue – perhaps not surprisingly, mainly between Georgie and Yeats. The inclusion of the colorful supporting characters Ezra Pound and Dorothy and Olivia Shakespeare, adds a dynamic element to the story, and Miller’s ability to create atmosphere in her writing is notable as she convincingly evokes the sights and sounds of wartime. More Miracle Than Bird is an entertaining read and a fine portrait of another of history’s forgotten women.
Read Full Review >>
Positive Ho Lin,
Foreword Reviews
... diverting ... fills in the blanks by imagining Georgie’s life and circumstances, and in the process documents what it means to be a headstrong, free-spirited woman finding her place during tumultuous times ... Miller’s light approach moves the book along at a lively pace and convincingly evokes life in early twentieth-century London. The story gains poignancy from Georgie’s star-crossed romances. She strives for fulfillment during a time in which husbands were allowed to be less than faithful, and when women were expected to sacrifice their ambitions. More Miracle than Bird packs in plenty of meditations on art, love, and the mystical, but it’s most effective as an intimate yarn about obligations and expectations. Above all, it’s a monument to Georgie’s resilience; she arrives at her own version of happiness amid hard-won realizations.
Read Full Review >>
Positive Elizabeth Brogden,
Full Stop
More Miracle Than Bird, while certainly enjoyable without any prior knowledge of interwar Britain’s literary scene, will be richest for a reader with some background in this period and more-than-passing familiarity with its major players. This is due in no small part to the fact that, in Miller’s hands, they become minor, and it is by fully understanding their cultural stature, both contemporaneously and today, that the reader appreciates her radical inversion. For at least the first two-thirds of the novel, the famous half of the purportedly central duo is defined by absence: Yeats hovers at the edges of the text—alluded to (mostly pejoratively) and warned against, but rarely beheld. This is, perhaps, structurally apropos for a narrative with such heavy thematic investments in spectrality; but his marginality is far from tantalizing. Indeed, for much of the novel Georgie’s supposed 'fiancé' can be easily dismissed as a mediocre poet and ersatz father (as a teenager, Georgie had lost her own to alcoholism) who is easily outshined by his handsome, more age-appropriate rival, Lieutenant Pike ... the miracle of Miller’s Georgie has nothing to do with delicacy, ornamentation, or flightiness. To the contrary, it inheres in her prosaic qualities: grounded-ness, loyalty, lack of illusion, probity ... Ultimately, it is the affinity between Miller and her heroine that animates the novel and captures the interest of the reader, who is unlikely to feel more than indifference to the tepid May-December romance between Georgie and Yeats. Even ambivalence seems far too strong a word to describe their attraction, at least as it is depicted in the novel ... Is it an act of solidarity to fix the gaze on her, even if such scrutiny would have made her squirm? The power of Miller’s work lies not so much in persuading us of an answer, either way, but of prompting us to ask the question in the first place ... With a jeweler’s skill, Miller brazes together speculative and historical fiction into a remarkably sturdy bijou, using the conceits and feints of counterfactual to lend a certain permanence to the real woman time might otherwise be tempted to forget.
Read Full Review >>
See All Reviews >>
SIMILAR BOOKS
Fiction

This Other Eden
Paul Harding
Rave
What did you think of More Miracle Than Bird?
© LitHub | Privacy