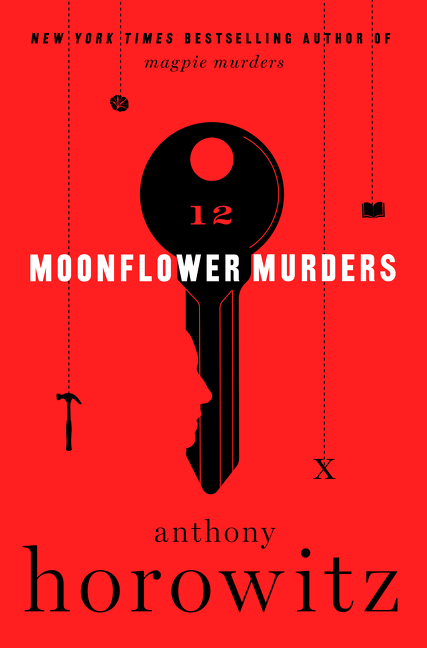 Retired publisher Susan Ryeland is living the good life. She is running a small hotel on a Greek island with her long-term boyfriend Andreas. It should be everything she's always wanted. And then the Trehearnes come to stay. The strange and mysterious story they tell, about an unfortunate murder that took place on the same day and in the same hotel in which their daughter was married, fascinates Susan and piques her editor’s instincts.

What The Reviewers Say
Rave Sarah Lyall,
The New York Times Book Review
The private detective Atticus Pünd appears to have stepped directly from the pages of a classic golden-age mystery and into Anthony Horowitz’s new novel, Moonflower Murders. Brilliant, arrogant, indisputably foreign, Pünd prides himself on understanding the inner workings of the human psyche, and is prone to dropping aphoristic bon mots ... there are two novels here — one an old-fashioned whodunit, the other a modern meta-story — meaning that what we are reading can literally be described as a mystery wrapped in an enigma. How these books speak to each other is one of many puzzles ripe for solving ... It’s a richly plotted, head-spinning novel about a present-day disappearance, a murder eight years earlier and a fictional murder that may be relevant to both. It is not an example of an author phoning something in ... Alert readers will admire the way Pünd, the detective hired to investigate, recalls the great Hercule Poirot, and how the story itself feels like a return to the cozy mysteries of our youth ... The book (the real, full book by Horowitz, that is) is too long and almost too labyrinthine. But getting lost in the weeds can be excellent fun, especially when the characters start trashing the very genre in which they’re appearing.
Read Full Review >>
Rave Tom Nolan,
The Wall Street Journal
Mr. Horowitz (like his creation Alan Conway) enlivens his pages with wordplay, anagrams and jokes that often double as clues. To borrow a make-believe blurb from Atticus Pünd Takes the Case: 'I love a whodunnit with a real sucker punch and, boy, this absolutely delivers.'
Read Full Review >>
Rave Michael Dirda,
The Washington Post
... anyone seeking a few evenings’ respite from the emotional roller-coaster of last week’s election need look no further ... To begin with, you’ll get two books for the price of one. Quite literally ... If all this sounds dizzyingly postmodern, it is and it isn’t. Horowitz’s plotting certainly rivals that of Ruth Rendell’s notoriously complex Barbara Vine mysteries, yet his prose moves along as briskly as that of Dick Francis at his best. Moreover, the whole metafictional twistiness of his current work — The Word Is Murder includes Anthony Horowitz himself as a major character — actually carries on from the gamelike nature of Golden Age whodunitry ... Horowitz showcases a cleverness and finesse that even Dame Agatha might envy. Moonflower Murders resembles a super Mobius strip, interlacing multiple degrees and levels of fictiveness.
Read Full Review >>
See All Reviews >>
SIMILAR BOOKS
Fiction

Find You First
Linwood Barclay
Positive
What did you think of Moonflower Murders?
© LitHub | Privacy