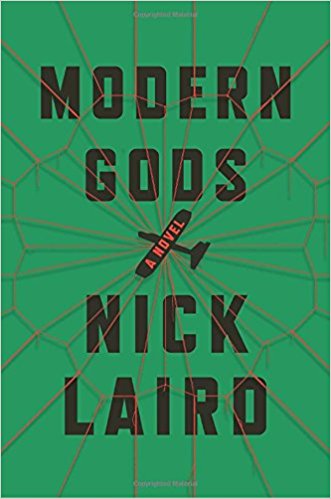 A novel set in Ulster and Papua New Guinea telling the parallel stories of two sisters, Alison and Liz, and the buried secrets of sectarian violence that emerge when they come together in their small hometown in Northern Ireland for Alison's wedding.

What The Reviewers Say
Rave Anna Mundow,
The Barnes & Noble Review
This could be the setup for a Maeve Binchy or Anita Shreve novel, and it is no insult to Laird to say that he moves things along as expertly as any bestselling novelist would. In a few exquisite vignettes, he introduces his characters and conveys the essence of love or pain, often with a simple gesture ... In a domestic drama — and Modern Gods is at heart just that — shuttling back and forth between Ballyglass and Papua New Guinea is a risky maneuver. But Laird is an agile writer who effortlessly switches location and point of view without sacrificing the empathy we feel for each character ... But Laird is at his best on his home turf. A poet as well as a novelist, he has a well-tuned ear for the speech of his native place and a keen eye for Northern Ireland’s shifting light and brooding sky.
Read Full Review >>
Positive Jennifer Egan,
The New York Times Book Review
The characters in Modern Gods traverse oceans, time zones and political situations as part of Laird’s project to pry apart the very structures of worship and locate the systems they have in common, among them storytelling and ritual cruelty ... Laird dazzles ear and eye with his kinetic prose, animating city, countryside and, later, tropical jungle ... Whereas the inner lives of Stephen, Alison, Liz’s parents and the victims of the pub shooting are rendered with deftness and sympathy, Liz remains something of a cipher; her fears, desires and grief — if she has it — remain opaque. This thin characterization becomes manifest in the New Ulster sections of the novel, where we’re confined to Liz’s perception ... Still, the dynamism Laird has conjured in New Ulster — a trill of incipient violence; a mass imbibing of a hallucinogen that leaves the BBC producer prone and vomiting — keeps us reading, and the tragic climax resonates powerfully with the Northern Ireland sections of the novel. Apart from any theory, the events of the story leave a vivid impression of the opportunistic mythmaking, sectarian conflict and pragmatic greed at the heart of these religious systems.
Read Full Review >>
Mixed James Walton,
The New York Review of Books
As long as Liz is in Ulster, this double perspective remains. Laird continues to serve up a sharp, entirely recognizable, and sometimes funny account of the tensions and pleasures of a family reunion. But with Liz’s help, he also continues to draw our attention to those unnoticed myths—both political and personal ... the New Ulster sections too often read like dutiful pieces of straight anthropology: well written, certainly; fully realized, probably; fully felt, not so much ... Because the Melanesian section ends in murderous violence too, the book ends with Liz and Alison back at their parents’ house, taking refuge in what Alison had called the 'cult' of the family. But it also seems as if, after all the troubling questions he’s raised, Laird is taking refuge there as well...By finishing this way, Laird is perhaps implying that personal myths are easier to correct than political ones. Yet even if that’s true (and little else in the novel has led us to believe it), such an oddly happy ending seems distinctly inadequate as a response to all that’s gone before. Nevertheless, the primary problem with Modern Gods is still that, for all his efforts, Laird never properly convinces us that we can learn much about Ulster Protestants by studying a Melanesian cargo cult. Ironically, this leaves the novel feeling like an instance of the parallel universe becoming visible—as if two separate books existed and somehow inhabited the very same space.
Read Full Review >>
See All Reviews >>
SIMILAR BOOKS
Fiction

Girl A
Abigail Dean
Rave
What did you think of Modern Gods?
© LitHub | Privacy