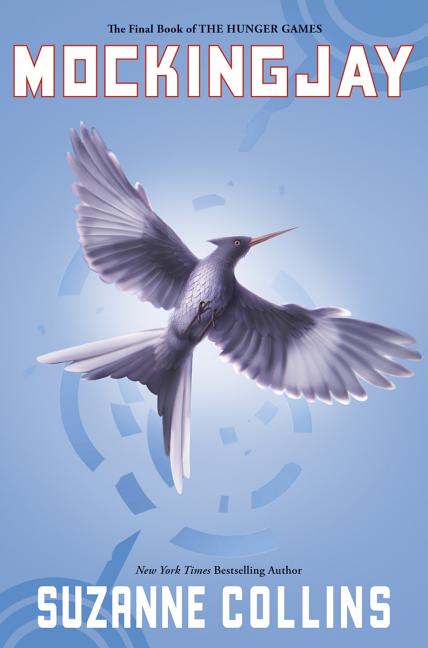 The final installment of Suzanne Collins's groundbreaking "Hunger Games" trilogy. Against all odds, Katniss Everdeen has survived the Hunger Games twice. But now that she's made it out of the bloody arena alive, she's still not safe.

What The Reviewers Say
Rave SUSAN CARPENTER,
The Los Angeles Times
Unfolding in Collins’ engaging, intelligent prose and assembled into chapters that end with didn’t-see-that-coming cliffhangers, this finale is every bit the pressure cooker of its forebears ... Mockingjay takes readers into new territories and an even more brutal and confusing world: one where it’s unclear what sides the characters are on, one where presumed loyalties are repeatedly stood on their head ... More maudlin than the first two books in the series, Mockingjay is also the most violent and bloody and, based on the actions and statements of its characters, its most overtly antiwar — though not so much that it distracts from a series conclusion that is nearly as shocking, and certainly every bit as original and thought provoking, as The Hunger Games.
Read Full Review >>
Rave Faye Bi,
Tor.com
Mockingjay moves away from the arena as the rebellion gains more steam, but the novel has no shortage of violence and death. In fact, I am impressed by how fearlessly Collins addresses heavy themes like war and torture for a YA audience. The rebels fight and the Capitol falls, but to call the ending unambiguously happy would be a disservice ... Collins’s primary success in Mockingjay is characterization, particularly Katniss, the narrator and hero ... Readers are exposed to the innermost thoughts of an exceptional, psychologically damaged young woman whose home has been destroyed, whose friends have been murdered, and who must navigate through confusion and self-loathing as she finds herself a piece of a much bigger puzzle that is the rebellion ... Mockingjay is not without minor flaws, though nearly all of them come from Katniss’s limited perspective, so I accept them as stylistic choices ... an emotionally wrenching conclusion to the "Hunger Games" trilogy.
Read Full Review >>
Rave Trisha Ping,
Book Page
This is a fearless finale that brings the big question of the Hunger Games Trilogy—the ethics of using force, be it political, physical or psychological—to the forefront as Katniss and her allies attempt to overthrow President Snow and create a new Panem ... Collins, like Katniss, is a realist above all: The effects of war on civilians and conspirators alike are unflinchingly documented, and the grim tone established in the opening pages dominates. But the book is not without its moments of grace, and the powerful conclusion should leave readers with a better taste in their mouths than the much-maligned endings of other popular series. Haunting and meditative, Mockingjay is a wrenching finale to a trilogy that will be read and discussed for years to come.
Read Full Review >>
See All Reviews >>
SIMILAR BOOKS
Coming Soon