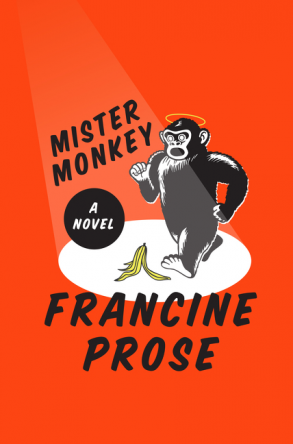 A darkly humorous novel that follows the exploits and intrigue of a constellation of characters affiliated with an off-off-off-off Broadway children’s musical.

What The Reviewers Say
Rave Cathleen Schine,
The New York Times Book Review
Expertly constructed, Mister Monkey is so fresh and new it’s almost giddy, almost impudent with originality. Tender and artful, Prose’s 15th novel is a sophisticated satire, a gently spiritual celebration of life, a dark and thoroughly grim depiction of despair, a screwball comedy, a screwball tragedy ... As cues and miscues (onstage and off) propel the story forward, Prose deftly passes the narrative perspective from one character to the next ... It’s an intricate technical accomplishment, even more remarkable because it feels effortless ... Sympathy, sharp and painful as a dart, is one of Prose’s most devastating and beautiful weapons ... Chekhovian. It’s that good. It’s that funny. It’s that sad. It’s that deceptive and deep.
Read Full Review >>
Rave Mameve Medwed,
The Boston Globe
As each tale unfolds, Prose offers insights on New York, evolution, Chekhov, childhood, adolescence, old age, stage mothers, trophy wives, loneliness, disappointment, and love ... As Prose’s overwhelmed characters take turns documenting their hopes and shattered dreams, their scattered voices join in a shared effort that adds power and meaning to the plummeting production. In this strong, humane, and funny novel, Prose has treated us to an enthralling entertainment both on and off stage.
Read Full Review >>
Positive Ron Charles,
The Washington Post
Fertile as the play is for drama and satire, Prose’s novel leaps out beyond the circle of theater people ... this [elderly widower] chapter — a masterful short story, really — is almost too good, in that it casts a shadow over the others, which don’t attain the same level of complexity or poignancy ... a lovely tribute to the transformative value of imagination.
Read Full Review >>
See All Reviews >>
SIMILAR BOOKS
Fiction

Mother May I
Joshilyn Jackson
Rave
What did you think of Mister Monkey?
© LitHub | Privacy