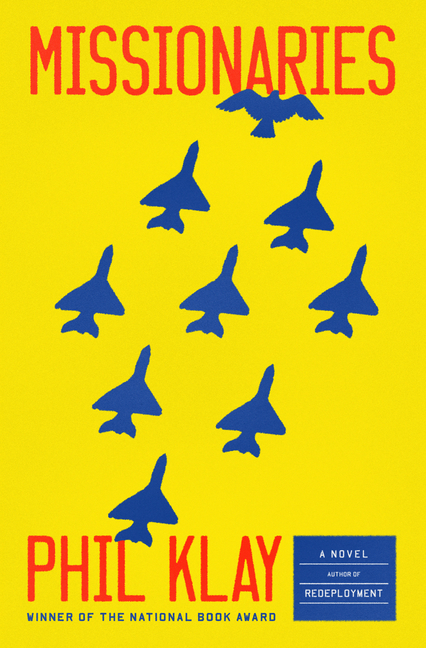 The debut novel from the National Book Award-winning author of Redeployment. For Mason, a U.S. Army Special Forces medic, and Lisette, a foreign correspondent, America's long post-9/11 wars in the Middle East exerted a terrible draw that neither is able to shake. Where can such a person go next? All roads lead to Colombia, where the U.S. has partnered with local government to keep predatory narco gangs at bay.

What The Reviewers Say
Rave Juan Gabriel Vásquez,
The New York Times Book Review
Klay’s understanding of Colombia, the main theater of war in Missionaries, is the chief source of admiration for this reviewer. There are no simple wars, of course, but the Colombian conflict is as intricate as they come ... building a coherent novel out of such chaos-prone material requires order, structure, architecture. Klay is very disciplined, giving his characters regular turns at the microphone to tell their stories before having their paths cross in the novel’s version of hell: a small town in northern Colombia where all the forces of this particular war, including its politics, have come to clash ... a courageous book: It doesn’t shy away, as so much fiction does, from the real world of local politics, often including real names and events, never making any concessions to a reader’s potential impatience with all things foreign. It never simplifies; it doesn’t even try to streamline the situation. We do feel, however, Klay’s restlessness about how much information to give—and his preoccupation with the adequate tools to give it. This authorial anxiety occasionally leads to problematic narrative choices ... But these are minor flaws in a novel notable for its empathy and its curiosity (in the shape of voracious research), and for its cleareyed observation of war in the 21st century ... the novel goes on, undeterred, exploring and revealing whole human worlds that would remain inaccessible without it.
Read Full Review >>
Rave Nathan Deuel,
Los Angeles Times
... beautiful, violent and almost perfect ... Missionaries is (among its many virtues) a prime example of what can ideally follow a first great war book. Intricate and ambitious, it’s a rich network of converging stories in which the plot itself becomes the destiny of its characters ... Missionaries is horrifying and refreshing, challenging us to reflect not just on the destruction of our own national institutions but also on the ugly and ongoing consequences of American power abroad.
Read Full Review >>
Mixed Dwight Garner,
The New York Times
... many slowly grinding parts. It gets the job done, just about, but it’s a ponderous journey ... It’s got a lot of primary characters. It’s got a story that skips around in time, so there’s a moral Doppler effect to factor in. The reader needs to leave a trail of stones so as not to get lost ... One needs a sharp pencil, a deep intake of breath and a willingness to follow the author closely. On occasion I lacked at least two of the three ... The author has done his homework and sticks pushpins into a large map. Yet this novel works, when it does, when it flies lower to the ground. Its flashes of genius and beauty are entirely in its details, not in foreign policy punditry ... Klay is brilliant on things like what it’s like to walk through a city after a recent bombing. He is very fine on what he calls the soundtrack of war ... He understands both the technology of war and the wet stuff of brutality and torture. He’s dryly funny about the new realities of American journalism and foreign reporting ... Klay’s writing about tending to the wounded is electric in its exactness ... These excellencies are small moments tucked into a baggy novel that struggles to find its focus. It’s not the author’s fault that the culture is saturated with prestige dramas about the drug wars, and that Don Winslow recently wrapped up his masterly Cartel trilogy. But there’s a sense, while reading Missionaries, of moving over instead of transcending familiar ground.
Read Full Review >>
See All Reviews >>
SIMILAR BOOKS
Coming Soon