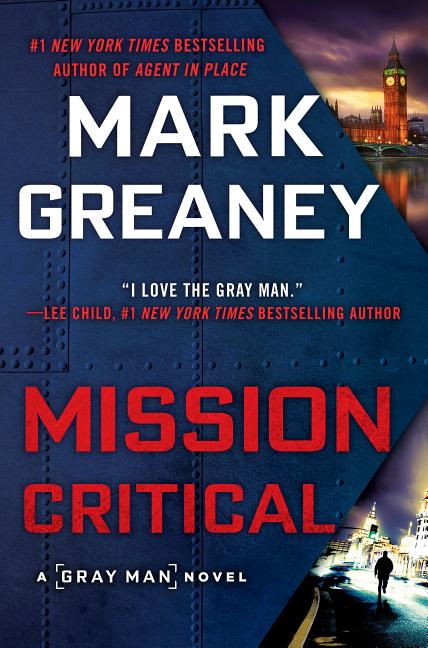 In this eighth novel in the bestselling Gray Man series, Court Gentry must find the men who kidnapped a CIA asset and murdered his compatriots while another attack targets his former lover, Zoya Zakharova, who narrowly escapes.

What The Reviewers Say
Rave Ryan Steck,
The Real Book Spy
Mark Greaney...reignites the Cold War in his latest must-read thriller ... While Greaney obviously has a deep understanding of geopolitics, he also has a natural feel for developing characters and certainly knows his way around an action scene. His action sequences are some of the best in print right now, and there’s plenty of firefights, car chases, and explosions in this one. Likewise, it’s impressive to see how far Gentry has come over the course of eight books. He still has the same attitude and plenty of smartass one-liners, but Greaney’s adding new things too, like a potential love interest. It’s all part of the Gray Man’s continued development, and just when you think Greaney’s going to zig, he zags–setting up his next trick. Mark Greaney continues his dominant run with Mission Critical, his most impressive novel yet and the clear-cut early favorite for best thriller of the year.
Read Full Review >>
Rave Jeff Ayers,
Booklist
The latest in the Gray Man series continues to demonstrate why Greaney belongs in the upper echelon of special-ops thriller authors ... The tension in this adrenaline-fueled thriller, the eighth in the series, never lets up for more than 500 pages. Remarkably, each Gray Man novel is better than the ones that came before.
Read Full Review >>
Positive Steve Donoghue,
Open Letters Review
... [a novel containing] bountiful, non-stop action ... As skilled as Greaney is at orchestrating the action sequences that fill his novels, it’s this ear for quippy dialogue... that always provides the grace notes of a Gray Man novel ... Greaney’s characters never sound like characters; they come well-stocked with memorable turns of phrase, they stay wary of everything, and they brim with tetch, even the shadowy characters we see pulling the strings at the novel’s beginning ... Greaney twines the two plots together with a clockwork niceness that never feels artificial, building suspense around the question of whether two such operatives, so formidable individually, might be unbeatable once they’re finally fighting together ... fans of the action-thriller genre who’ve somehow missed Mark Greaney’s books can settle down and begin enjoying themselves right here.
Read Full Review >>
See All Reviews >>
SIMILAR BOOKS
Fiction

The Devil Takes You Home
Gabino Iglesias
Positive
What did you think of Mission Critical?
© LitHub | Privacy