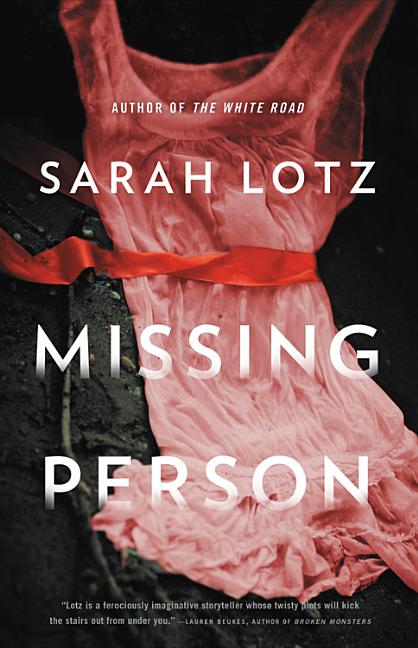 In 1996, a dead white male with a cranial fracture is found on the outskirts of Millar, Minnesota. The unidentified murder victim, who’s wearing a pink prom-style dress, is nicknamed the Boy in the Dress. No progress on giving him a name is made until 2017 when a stranger tells Shaun Ryan that his late uncle, Teddy, didn’t die in a car accident two decades earlier, as Shaun believed.

What The Reviewers Say
Positive Michael Sears,
New York Journal of Books
Missing Person is a character driven novel; don’t expect to be on the edge of your seat for the 470 pages ... Lotz has written a thoughtful thriller that is as much about the psychology of people who hide in various ways than about catching a murderer. The Internet is front and center, but this book is about the people.
Read Full Review >>
Positive Kate Ayers,
Bookreporter
... breaks the mold on thrillers. Author Sarah Lotz is off and running from the day in the graveyard that Shaun learns about his uncle to the day that the killer is unmasked. During that timeline, every page reveals a new nugget of Teddy’s life --- and another clue to his death. There are many quirky characters, with their online usernames, which can lead a reader to want a chart for reference. But as soon as you get to know them individually, with their unique personalities, you’ll want to step into their lives and learn more about each one of them ... not just about finding Teddy and what happened to him. It’s also about the cast of players here. Every one of them has a burning need for growth. Some achieve it. Others --- well, read and see.
Read Full Review >>
Positive Jennifer Funk,
Library Journal
Lotz’s clever novel includes a judicious use of formats such as messaging transcripts and web comments to move along the plot while providing insights into the Missing-Linc.com crew. Suggested for fans of authors such as Ruth Ware, Jennifer McMahon, Gillian Flynn, and Nic Joseph.﻿
Read Full Review >>
See All Reviews >>
SIMILAR BOOKS
Fiction

The Maid
Nita Prose
Positive
What did you think of Missing Person?
© LitHub | Privacy