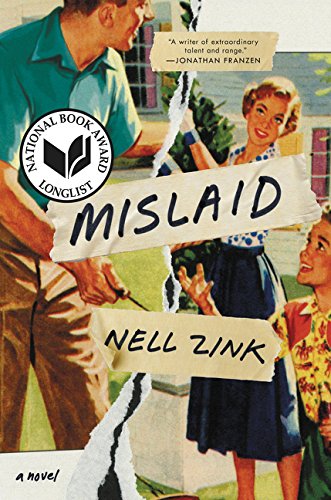 Freshman Peggy, falls under the spell of Lee, a blue-blooded poet and professor, and they begin an affair, leading to an unplanned pregnancy and marriage. The couple are mismatched from the start—she’s a lesbian, he’s gay—but it takes a decade of emotional erosion before Peggy runs off with their three-year-old daughter, leaving their nine-year-old son behind. Worried that Lee will have her committed for her erratic behavior, Peggy goes underground, adopting an African-American persona for her and her daughter. Eventually the long lost siblings will find each other, setting off a series of misunderstandings and culminating in a comedic finale worthy of Shakespeare

What The Reviewers Say
Rave Kathryn Schulz,
The New Yorker
Irreverent,; that prose-friendly adjective, does not come close. White writers seldom laugh about race—or, for that matter, write about it. But Zink, who has the courage of her convictions and the buffer of the Atlantic Ocean, creates in Mislaid a high comedy of racial identity...That makes the book a rarity on at least two fronts, because the shortage of smart new novels about race has nothing on the shortage of genuinely funny literary fiction. But Zink is a comic writer par excellence, one whose particular gift is the capacity to keep a perfectly straight face ... The result is a hoot, a lark—all those bird words. But it is also deadly smart ... We think of being deadpan as playing it straight during comic episodes, but Zink stays deadpan through everything—through outlandishness, anger, injustice, grief. Both that voice and the stories Zink tells are so startling, so seemingly without antecedent, that she would seem like an outsider artist, if she did not betray so much casual erudition.
Read Full Review >>
Rave Walter Kim,
The New York Times
Zink’s narrator is a knowing, omniscient figure who speaks directly to the reader while floating anonymously above the story, offering sharp observations and mordant commentary and smoothly moving things along in the manner of novels from an earlier century ... This lost mode of storytelling, updated by Zink, imbues the book with an elegance and confidence that are exceptionally rare now, and most welcome. Instead of the crabbed, neurotic tone that one might expect when treating such loaded material, she skips along with ease and clarity, summarizing, compressing and encapsulating, unflappably wise and in control ... This odd situation’s farcical unraveling harks back to Elizabethan comedy, and Zink exploits its potential with zany verve. The problem is that, in contriving her grand finale and systematically playing against type as she sketches her swelling cast of characters, her hold on the story loosens somewhat ... The damage isn’t fatal, though; the novel’s charm and intelligence run deep. It’s a provocative masquerade with heart, not just an exercise in role reversals, reminding us that the gaps and cracks between our insides and our outsides are the spaces where our spirits live.
Read Full Review >>
Rave Seth Colter Walls,
The Guardian
...[Zink] takes thrilling narrative shortcuts in order to make space for her characters’ oracular and erudite disquisitions—while also dispensing with many of the supposed requirements of the 'literary novel'...In the space of a page, Zink readers should expect to learn of a character’s progressive engagement with Dylan Thomas, Prince, and Samuel Beckett. We should also be ready for seemingly important male characters to die off suddenly, with a lack of emotional affect that would likely impress Sartre or Camus...And while Mislaid may claim fewer jokes per page than Zink’s debut...it is the bolder and more memorable fictional creation. The plot’s broad strokes are the stuff of comic opera, updated for the 20th-century American south ... Obviously, the narrative strands are going to collide. Obviously, before that occurs, the book all but taps you on the shoulder to suggest that you might dispute its plausibility ... But it’s precisely by giving readers a new and outlandish tale – one that strays well beyond the borders of so-called 'realism' – that Mislaid becomes surprisingly affecting ... It would be easy for passages steeped in such knowingness to curdle into a work of literature that’s more grimly impressive than it is joyfully immersive. So it’s a delight to find that, ultimately, the kids of Mislaid come out a little less damaged than their parents. Like Zink’s own writing style, they’re too hip to the sins of the past to fall back on easy political characterizations and assumptions, and too witty to be depressed for very long.
Read Full Review >>
See All Reviews >>
SIMILAR BOOKS
Fiction

Mount Chicago
Adam Levin
Mixed
What did you think of Mislaid?
© LitHub | Privacy