Mary B: A Novel: An Untold Story of Pride and Prejudice 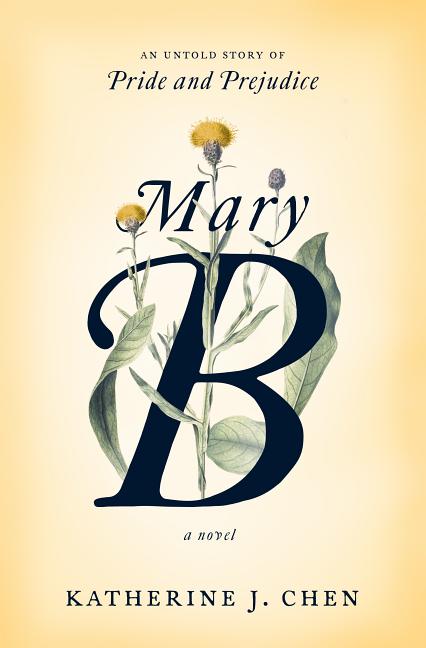 In this debut novel, the plain and overlooked Mary Bennet of Jane Austen's beloved Pride and Prejudice gets to tell her own story, which is filled with all the love and excitement she lacked in the 19th century original.

What The Reviewers Say
Positive Charles Finch,
Newsday
In Mary B, she [Mary Bennet] narrates herself into being. Her defining trait is her lack of beauty ... But her inner life, as Chen imagines it, is exceedingly rich—a bit prim at the outset but evolving rapidly as she gains experience. Eventually she becomes what might seem inconceivable, given her origins: a lover, multiple times ... Mary B is a book that aims first to illuminate what it’s like to be unbeautiful, overlooked, and yet to feel love as passionately as the beautiful do. But it also hopes to refract the characters we’re sure we know so intimately from Pride and Prejudice ... There’s a strong hint of fan fiction to Mary’s fairly rapid trek toward a second and a third love, including a riotously joyful initiation into her sexuality. Chen is also an erratic ventriloquist. Sometimes she finds a true Austenian pitch...but elsewhere she misses it badly. More complicated, her readings of Austen’s characters can be weak ... Yet for all that, Mary’s narration is a heedless downhill pleasure—plush, ironic and illuminating.
Read Full Review >>
Positive Mark Athitakis,
USA Today
Rather than remounting the Pride story in genre dress, Chen’s skillfully roots out blind spots in Austen’s perspective, the way Pride celebrated integrity and honesty but was often stingy with empathy or respect for contrarian women pursuing an intellectual life. Chen doesn’t soft-pedal how challenging Mary’s task is—she’s forced to keep much of her self-possessed spirit hidden. But quietude is a powerful resource ... Mary B is a tribute not just to Austen but to defiant women of any era.
Read Full Review >>
Positive Maureen McCarthy,
The Minneapolis Star Tribune
Mary B deserves a place among the many additions to the Austen franchise. Random House assures that one doesn’t have to read Pride and Prejudice to enjoy this sequel, but knowledge of the first will enhance enjoyment of the second. P&P fans’ satisfaction likely will depend on how well they receive Mary’s critiques of key characters. Mary’s tale also invites a guilty rethinking of those witty put-downs that seemed to go over her head in the original novel. Rest assured, they did not.
Read Full Review >>
See All Reviews >>
SIMILAR BOOKS
Coming Soon

A Trail of Crab Tracks
Patrice Nganang
Positive
What did you think of Mary B: A Novel: An Untold Story of Pride and Prejudice?
© LitHub | Privacy