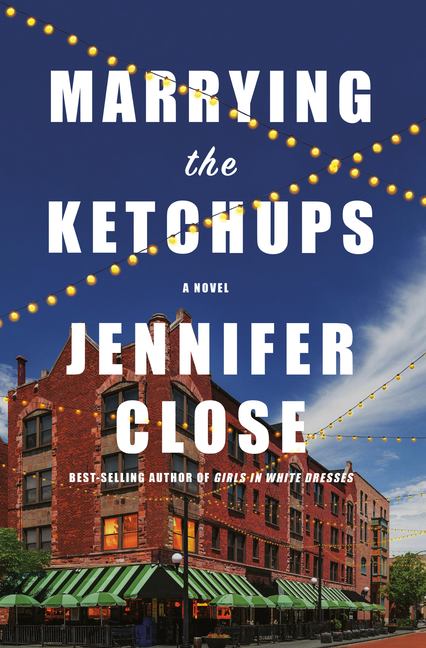 ]Here are the three things the Sullivan family knows to be true: the Chicago Cubs will always be the underdogs; historical progress is inevitable; and their grandfather, Bud, founder of JP Sullivan’s, will always make the best burgers in Oak Park. But when, over the course of three strange months, the Cubs win the World Series, Trump is elected president, and Bud drops dead, suddenly everyone in the family finds themselves doubting all they hold dear.

What The Reviewers Say
Rave Liz Moore,
The New York Times Book Review
... feels like what would happen if you took all of these ingredients and raised the flame beneath them just a bit, acknowledging not only the characters’ tribulations but the devastating changes unfolding in the background of their lives. Close’s choice to set her novel primarily in 2017, just after the election of Donald Trump, has the effect of broadening and deepening the philosophical questions her novel takes on ... This dance between the personal and the political, and the way the latter impacts the former, is the most interesting thematic element ... the trick Close has of taking what might otherwise be an ordinary exchange between ordinary family members and somehow making it riveting. Half of this talent stems from her merry sense of humor — I smiled throughout at various funny observations that also rang true — and the other half stems from the knack she has of inventing story lines that have the feel of extremely good gossip told across a hightop table over a beer with an old friend. Always, I wanted to stay for another, just to hear more ... Something I’ve been thinking about lately, as both a writer and a teacher of writing, is how difficult it is to make everyday events feel fascinating in fiction. Marrying the Ketchups is a good example of a book that performs this magic trick. Recently, I’ve come to the conclusion that propulsiveness is a quality that’s hard to explain and harder still to teach — but if Jennifer Close ever felt like running a course on it, I’d sign up.
Read Full Review >>
Rave Brendan Buck,
New City Lit
... Despite the potentially heavy subject matter, Marrying the Ketchups is an exceedingly funny novel, full of quotable quips and absurd situations ... Bridging the gap between the novel’s dramatic and comedic elements is the novel’s character work. The Sullivans are likable messes. Their tendency for error lends itself to hilarity and their struggles are relatable ... The absurdity at the heart of Marrying the Ketchups isn’t that the world stops when glory or tragedy strikes, it’s that it doesn’t ... maybe the novel that has best captured the way 'Our whole country feels shaky and flammable at the moment,' accomplished by vividly illustrating our last shaky and flammable moment.
Read Full Review >>
Positive Cory Oldweiler,
The Star Tribune
... lovingly lived-in ... These three, and indeed all their friends and family, are intensely recognizable characters, funny and flawed, angry and desperate, and much of the novel is dedicated to their engaging development — or lack thereof. The story accelerates in the final section owing partly to an all-too-real scandal surrounding consent, harassment and the internet, particularly acute issues in the sleazy klieg lights of the 45th president ... The conclusion is too neat, perhaps, but the characters acknowledge the privileges that made it possible. And they also realize that just because there are things that can be saved, it's often better to throw it all out and start from scratch.
Read Full Review >>
See All Reviews >>
SIMILAR BOOKS
Coming Soon

Fellowship Point
Alice Elliott Dark
Rave
What did you think of Marrying the Ketchups?
© LitHub | Privacy