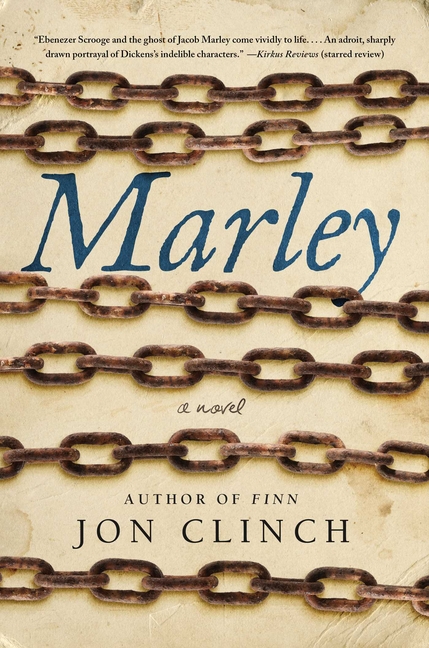 A re-imagining of Charles Dickens's classic, A Christmas Carol, exploring the twisted relationship between Ebenezer Scrooge and Jacob Marley.

What The Reviewers Say
Rave Simon Callow,
The New York Times Book Review
A Christmas Carol, despite the multitudinous saccharine versions souped up on stage and screen every festive season, is a pretty damn scary thing, but Jon Clinch’s prequel to it is black as hell, outstripping even Dickens’s remorseless and painful probings of his protagonist’s soul ... By some uncanny act of artistic appropriation, he has, without imitating Dickens, entered into the phantasmagoric realm that is the great novelist’s quintessential territory, and, like the fat boy in Pickwick, he triumphantly succeeds in making our flesh creep. But Clinch does much more than that ...he creates a penumbra of invention around the original novel ensuring — caveat lector! — that you may never be able to think of it in the same way again. Here, as there, he fleshes out characters and events often very lightly sketched in the original ... Clinch endows Dickens’s snapshots with a three-dimensional, often alarming, life ... His most startling and creative conception is the title character ... Clinch has done something remarkable in Marley, not merely offering a parergon to Dickens’s little masterpiece...but creating a free-standing dystopian universe, a hideous vision of nascent capitalism in which nothing is real and every transaction is a fraud issuing from the brain of a master forger, who by the end has reduced even his own life, quite literally, to a trompe l’oeil. Clinch’s Marley is one of the great farouche characters, at once frightening and dangerously attractive ... We can but hope that this masterly Gothic prequel will banish forever the Currier and Ives version of Dickens’s dark fable.
Read Full Review >>
Mixed Ron Charles,
The Washington Post
Clinch creates wholly original stories that snap together with the edges of classics we all know ... an amusing imitation of Dickens’s style ... Although Clinch relies on the details provided in A Christmas Carol, he never seems cramped by them .. If Marley has any flaws, it’s that this Battle of the Bookkeepers is not sufficiently dramatic to carry along the whole story. To its own detriment, the narrative concentrates too much on genteel domestic scenes and refined romantic conversations. Inexplicably, a potentially fantastic story line involving Marley in America takes place offstage. Alas, we hear just the barest details of that New World adventure, which gives us more time for drawing-room chatter. Unfortunately, that’s typical of this novel: Its violent acts are related with Victorian decorum; its emotional range is as tightly drawn as Mother Scrooge’s corset ... The result is a costume drama that pleasantly mimics Dickens’s tone and presents a plausible backstory to his most familiar creation but fails to generate enough of its own energy...We’re never chilled by anything close to the terror that Scrooge feels before his own gravestone. We never feel anything like the elation of his early-morning reformation. We never brush away embarrassed tears at anything like Tiny Tim’s sappy blessing ... Dickens, after all, offers more than complicated plots and comical characters. He knew the profound pleasure of succumbing to unbridled pathos and joy. If you can’t give us that, well, then . . . bah, humbug.
Read Full Review >>
Positive G. Robert Frazier,
BookPage
... whereas Dickens’ novel is ultimately uplifting—our stingy protagonist wholly embraces the lessons learned from ghostly visitations and immediately sets about amending his ways—Marley is anything but. It’s darkly haunting in its own way, but also devilishly fun reading. There are good reasons for the heavy chains wrapped around Jacob Marley’s ghost when he visits Scrooge that fateful Christmas Eve, and author Jon Clinch spares no detail as he depicts Marley in this prequel as a harsh, uncaring, coldly calculating, deceitful individual, showcasing his malevolent influence on Scrooge ... Clinch...has successfully added a layer of depth and intrigue to Dickens’ beloved characters.
Read Full Review >>
See All Reviews >>
SIMILAR BOOKS
Fiction

Mona at Sea
Elizabeth Gonzalez James
Positive
What did you think of Marley?
© LitHub | Privacy