Make Me a City 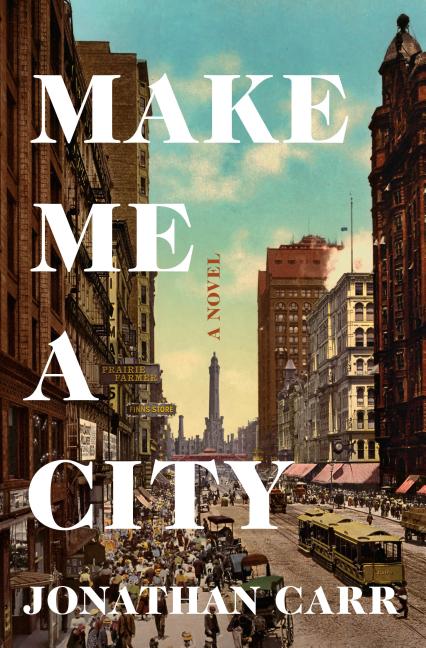 This alternate history and debut novel traces the rise of Chicago through the interwoven voices of various historical and fictional characters, from first non-indigenous resident Jean Baptiste Pointe de Sable to the various immigrants and working people who helped build the metropolis and keep it running.

What The Reviewers Say
Positive Joshua Finnell,
Library Journal
Carr's debut novel is an impressive literary experiment ... Because chapters rotate between literary forms and time periods, readers may find the narrative structure challenging to follow. However, Carr effectively weaves the stories of his sprawling cast of minor and major figures to underscore the city's myriad threads of development ... An ambitious literary debut that occupies a liminal space between alternative history and experimental literature.
Read Full Review >>
Positive Sarah Johnson,
Booklist
Carr’s intricately woven debut evokes the history of nineteenth-century Chicago while showcasing important but little-known historical figures and fictional people from different walks of life ... While their personalities are colorfully rendered, the depictions of Native Americans aren’t terribly nuanced. More eclectic than Micheneresque, the novel nonetheless offers a strong sense of place. Ambition, injustice, and opportunity all play roles as Chicago expands outward and upward. Over time, the disparate stories, which span the entire century, intersect in delightfully unexpected ways.
Read Full Review >>
Pan Kathleen Rooney,
The New York Times Book Review
If Make Me a City really had been written in 1902, then it would be an extraordinarily forward-thinking and valuable corrective to the erasure of the contributions of women, immigrants and people of color to America’s 'second city.' As it is, Carr’s ambitious and presumably well-intentioned tome comes across as pandering, self-satisfied and ultimately wrongheaded ... approaches literary blackface ... When a book immediately elicits doubt over its authority and dexterity to represent its subjects, it’s hard for the reader to recover. This is not to say that authors can’t represent difference; they can and they should. It’s not even to say that a white British man like Carr can’t write from the point of view of a mixed-race man like de Sable. But writing across difference should be humanizing, and representing difference isn’t the same as demonstrating one’s own enlightenment. Alas, Carr writes with a cartoonish lack of nuance ... depicts most of his characters in strokes so broad they fall simplistically into the slots of noble hero or irredeemable villain ... throughout, the novel seeks to take retroactive credit for compassion and right-mindedness it hasn’t earned.
Read Full Review >>
See All Reviews >>
SIMILAR BOOKS
Coming Soon

A Trail of Crab Tracks
Patrice Nganang
Positive
What did you think of Make Me a City?
© LitHub | Privacy