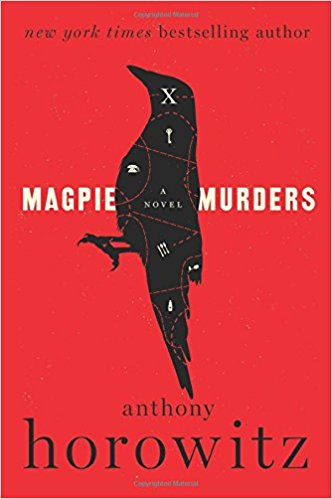 A novel within a novel, a pastiche of of Agatha Christie and the classic English detective story, from the bestselling author of Moriarty and Trigger Mortis.

What The Reviewers Say
Rave Charles Finch,
The Washington Post
Anthony Horowitz’s sleek, fun, cunning new novel is a complex reckoning with Christie’s immense popularity, and what it says about us as readers ... a flawless imitation of the Golden Age mysteries of Christie, Ngaio Marsh, Margery Allingham ... Horowitz captures Christie’s uncanny ability to glide at lark’s height over a village’s inhabitants, exposing their little weaknesses, dreams, secrets; everyone, even if it’s not murder, is guilty of something ... Each of the narratives in Magpie Murders is engaging and fluid, each with its own charm, though Horowitz’s joyful act of Christie ventriloquism is, in particular, spectacularly impressive.
Read Full Review >>
Rave Sarah Begley,
TIME
Much like his character Alan, he is both prolific and a bona fide student of the golden age of detective fiction — and his knowledge shines through in this book, which is catnip for classic mystery lovers. As a Christie disciple, he is near equal to his master ... With its elegant yet playful plotting, Magpie Murders is the thinking mystery fan's ideal summer thriller.
Read Full Review >>
Positive Tom Nolan,
The Wall Street Journal
[Horowitz] has, like a magpie, taken themes, devices, techniques and shtick from the styles of at least half a dozen other writers (Agatha Christie to Sophie Hannah, E.C. Bentley to Robert Harris) in order to concoct an entertaining hall-of-mirrors work in which art imitates life and vice versa. As parody, pastiche or a whole new sort of puzzle, Magpie Murders holds one’s attention from first to last. Its echoes and allusions continue to tease the brain even after the book is closed.
Read Full Review >>
See All Reviews >>
SIMILAR BOOKS
Fiction

Before She Disappeared
Lisa Gardner
Rave
What did you think of Magpie Murders?
© LitHub | Privacy