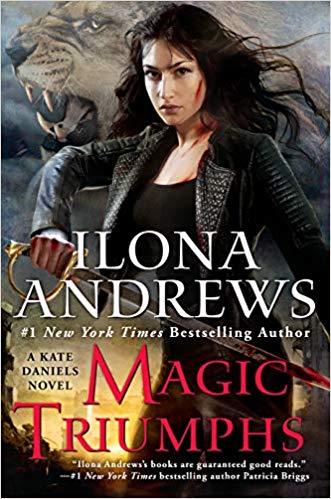 Mercenary Kate Daniels must risk all to protect everything she holds dear in this...can't-miss entry in the thrilling #1 New York Times bestselling urban fantasy series.

What The Reviewers Say
Positive Lois Dyer,
Bookpage
There are clearly no limits to the wildly creative genius of Ilona Andrews, and never has that literary imagination been more evident than in Magic Triumphs, the tenth and final novel in the Kate Daniels series. Kate’s dangerous father is up to his old tricks—this time he’s scheming to gain access to Kate and Curran’s toddler son. Kate has more than her difficult parent to deal with, however, because an ancient and powerful enemy has challenged her. Atlanta residents are being attacked, disappearing and dying. The Pack of shape shifters once ruled by Curran, the People who control vampires, the Witches and their Oracle, the Mercenary Guild and all the rest of Kate’s friends with supernatural powers will stand with her. But they may not be enough to stop the strongest threat Kate has ever faced ... This tenth novel completes the arc of the Kate Daniels adventures but readers are left with an inkling that they may see more stories set in this world ... Readers will surely be anxiously awaiting further developments from the amazing Andrews.
Read Full Review >>
Rave Jill M. Smith,
RT Book Reviews
It has been a little over a year since Kate gave birth to her son, Conlan, and thankfully during that time she and her father Roland have been existing under an uneasy truce. However, everything changes after Kate is contacted by a terribly agitated Teddy Jo (the Angel of Death), who wants to show her something ... After 10...books, the dynamite Andrews’ team brings their...Kate Daniels series to a close. From the opening line in the first book Magic Bites, readers were immediately thrust into a world like no other, centered around a wise-ass, determinedly solitary heroine who kicked butt with style and grit.
Read Full Review >>
Positive Alana Joli Abbott,
Den of Geeks
Magic Triumphs begins with a short prologue chapter showing Kate giving birth to the son previously revealed to her in visions. And, as happens if you’re the daughter of the greatest power in the world since magic reawakened, Kate’s father tries to steal the baby when Kate’s at her weakest. But, as also happens when you’re the daughter of the greatest power in the world, Kate’s no slouch and, even post-labor, she’s not willing to give in ... While some of the plot is straight forward, the relationships among the various characters, some of whom have taken nine previous novels (plus multiple short stories and novellas) to get to know, depend on having background. If you take the plot out of the context of these relationships, the book won't be remarkable. It’s the relationships that make this series so worthwhile.
Read Full Review >>
See All Reviews >>
SIMILAR BOOKS
Fantasy