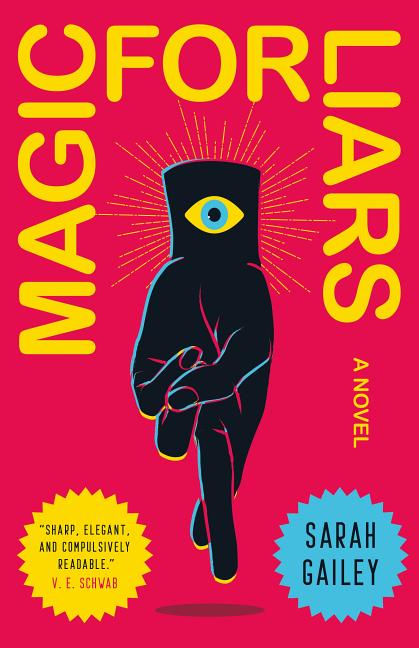 When a gruesome murder is discovered at The Osthorne Academy of Young Mages, where Ivy Gamble's estranged twin sister teaches Theoretical Magic, reluctant detective Ivy is pulled into the world of untold power and dangerous secrets. She will have to find a murderer and reclaim her sister—without losing herself.

What The Reviewers Say
Rave Brit Mandelo,
Tor.com
Magic for Liars was a challenge to sit and write an articulate, reasonable response to—because it’s that good. Translating the burst of astonished, nigh-on-outraged delight I finished the book with to functional human language took some time. I thought maybe I’d just record a clip of me shaking the book with both hands at a camera in silence ... the novel works on two fronts simultaneously, and each is as good as the other. On the level of individual text, a book with a tale to tell, it’s got scalpel-edge precision in its prose, a compulsively engaging plot, and twisty, unpredictable characters that clash in unexpected ways. Then there’s the secondary level, the one that has me all sorts of bothered (in the positive sense): Magic for Liars is deliciously aware of genre conventions—and in constant, sly, manipulative conversation with them. The novel is a readers’ novel, the sort of text that teases and tugs the attention of the audience in contradictory directions reliant on their shared understanding of tropes ... The plot, too, is stunning. Magic for Liars has an excellent grasp on the structure of mysteries ... Magic for Liars is a perfect, spare, delectable novel that features a masterful narrative structure, terribly human characters occupying realistically magical settings, and more ... I can’t recommend it highly enough.
Read Full Review >>
Rave Christina Tesoro,
Lambda Literary
What would have happened to Petunia Dursley if she were left behind and decided to become a private investigator instead of a nosy homemaker? The answer is a painfully human protagonist, who struggles with alcohol and a simmering depression, as well as unresolved and lingering grief, barely articulated, from her mother’s death ... Gailey relies on magic school tropes with a light and sly touch ... Queer themes are woven very subtly and neatly into the story–it’s a thing that is so normal as not to need to be overtly commented on. More than anything else, though, Magic for Liars is a quietly emotional story. Readers will want to know whodunnit, but more than that, they want to know Ivy, and are invested in Ivy’s processing of her past with Tabitha, the way the sisters navigate jealousy, betrayal, estrangement, grief, and love.
Read Full Review >>
Positive Liza Graham,
NPR
Sarah Gailey's premise had me intrigued from the start, and though it took me a while to warm up to Ivy as a narrator, I found her worth the wait. Sure, she's bitter and thorny, but Ivy has the mordantly hilarious humor of a woman who lives by her wits, as well as a private investigator's talent for observation and for drawing people out ... I think Ivy succeeds as a protagonist because, like so many women, she's a talented person who feels like a failure because she isn't extraordinary ... I don't know whether Magic For Liars works as a crime novel; Ivy is believable as a sharp investigator, but the narrative may hand her a few too many gifts. I think it does work as an emotional story that contains magic: a tale of two sisters, each at her own turning point, heading unavoidably towards collision. The worldbuilding is solid and done with care. I do have a few reservations: The principal love interest is perhaps a little too wonderful a person, and the only specifically African American character on the staff—the formidable Mrs. Webb—is a source of scalpel-sharp insight and unexpected power, whose portrayal skates perilously close to magical stereotype. Ultimately, though, Magic For Liars is a good read.
Read Full Review >>
See All Reviews >>
SIMILAR BOOKS
Fantasy

Rabbits
Terry Miles
Rave
What did you think of Magic for Liars?
© LitHub | Privacy