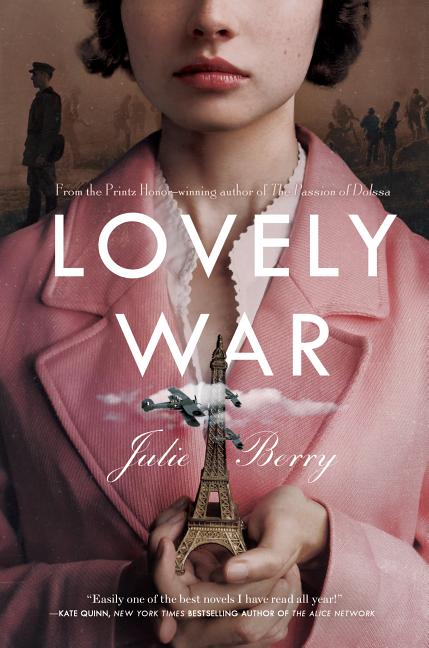 A multi-layered romance set in the days of World Wars I and II, where gods hold the fates--and the hearts--of four mortals in their hands.

What The Reviewers Say
Rave Karen MacPherson,
The Washington Post
Pick an adjective — sweeping, sprawling, epic, Olympian — and yet none quite conveys the emotional width and depth of Julie Berry’s brilliant new novel ... Berry is a master at weaving disparate elements to craft a truly original story populated with characters who will take up permanent residence in readers’ hearts and minds. Berry also doesn’t neglect the need for some levity, and readers will be especially amused by the Immortals’ snarky comments and constant competition with one another ... a uniquely multilayered novel that readers will be reluctant to conclude. Though Lovely War is being marketed to teens, adults looking for a memorable, well-told tale should not be shy about delving in, too.
Read Full Review >>
Rave Jennifer Hubert Swan,
The New York Times Book Review
The bickering gods, romantic rendezvous and exploding shells, set against impeccably rendered Paris streets and sandbagged trenches, read like a divine mix of Kate Atkinson and Neil Gaiman. When the hurly-burly’s done, and the battle’s lost and won, does Love conquer War? The answer is never in doubt, but it’s a pleasure to have it confirmed by a celestially inspired storyteller.
Read Full Review >>
Rave Ilene Cooper,
Booklist
In hands less skilled than Berry’s, this multifaceted novel might easily have spun out of control. Mixing Greek gods, the brutally described horrors of war, the tenderness of love, and the evils of racism, in both its blatant and insidious forms, seems more than one book can handle. Yet Berry is her own Scheherazade, mesmerizing us with intertwined tales that describe the depths of suffering and the sweetness of love with remarkable intensity and naturalness. This is one of those books in which readers will feel that they are in it together with all the story’s characters. In fact, it is one of Berry’s real triumphs that she manages to give nearly equal weight to a large cast of very different characters ... This is not particularly a young adult book. Every emotion, description, and literary sleight-of-hand could just as easily be in an adult novel. And that is one of Berry’s greatest strengths. She just writes ... proves again that Berry is one of our most ambitious writers. Happily for us, that ambition so often results in great success.
Read Full Review >>
See All Reviews >>
SIMILAR BOOKS
Fantasy

The Memory of Souls
Jenn Lyons
Positive
What did you think of Lovely War?
© LitHub | Privacy