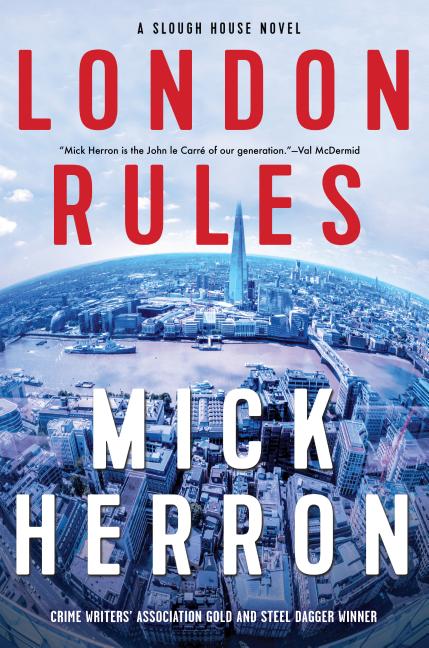 In the latest in the Gold and Steel-Dagger-winning Slough House series, MI5 agents are struggling with personal problems: repressed grief, various addictions, retail paralysis, and the nagging suspicion that their newest colleague is a psychopath. Plus someone is trying to kill Roddy Ho. But collectively, they're about to rediscover their greatest strength—that of making a bad situation much, much worse.

What The Reviewers Say
Rave Mark Lawson,
The Guardian
This is the fifth in Mick Herron’s Jackson Lamb series, which in characterisation and tone is essentially a rollicking subversion of John le Carré’s books about George Smiley ... Stylistically, Herron’s narrative voice swoops from the high...to the low ... But it’s the dialogue that zings: the screenwriters of the inevitable TV version won’t have to change much ... The dominant tactic, though, is the juxtaposition of big jokes and high jeopardy ... Herron is a very funny writer, but also a serious plotter ... Readers may sometimes feel queasy that the creation of Lamb, a man who says the unsayable, gives Herron easy licence to write the unwritable on subjects such as race and disability, in the way that character comedy can allow performers to pass off bigotry as irony. For me, though, these grotesque creations have the subtler purpose of challenging a society that increasingly applies sensitivity and offensiveness tests to public discourse. Where Herron’s novels most overlap with those of Le Carré is in the severity of their critique of the failures of management in post-imperial, pre–Brexit Britain.
Read Full Review >>
Rave Marcel Berlins,
The Times
Herron manages to make his characters amusing, to devise a twisting-turning plot that is much more than a receptacle for one-liners and witticisms, to introduce serious and satirical political and social issues, and to blend the whole concoction with pungent dialogue and superb writing ... His plots, which are about crime rather than espionage, are ridiculously exaggerated and hugely funny. His characters are mostly unpleasant, corrupt or criminal—or wanting to be. They seek sex and fortune and talk incessantly and brilliantly ... In London Rules he has combined the essence of perpetual humour with a background of reality. He may make us laugh on every page, but he also makes us think.
Read Full Review >>
Rave Crime Fiction Lover
The plot is complicated, the plotting of the various factions involved even more so, and it’s testament to Herron’s skills that you will never get lost. There is some fantastic verbal sparring ... From the pen of a lesser writer I’d be throwing the book down but it is so intelligently done—a bit like Bill Hicks—that I was nearly in tears with laughter. Ultimately, what saves [protagonist] Lamb (and Herron) is that Lamb really cares. Beneath the crude behavior, the insults and farting, the constant attempts to get Standish drinking again, if Lamb thinks you deserve it, then he is loyal and protective to the very end. Herron makes us care about all of his screw ups (okay, maybe not Ho), because he knows if we don’t, then the humour and satire will fall flat ... what connects the whole series, is their optimism for the human spirit. Dig in.
Read Full Review >>
See All Reviews >>
SIMILAR BOOKS
Fiction

Before She Disappeared
Lisa Gardner
Rave
What did you think of London Rules?
© LitHub | Privacy