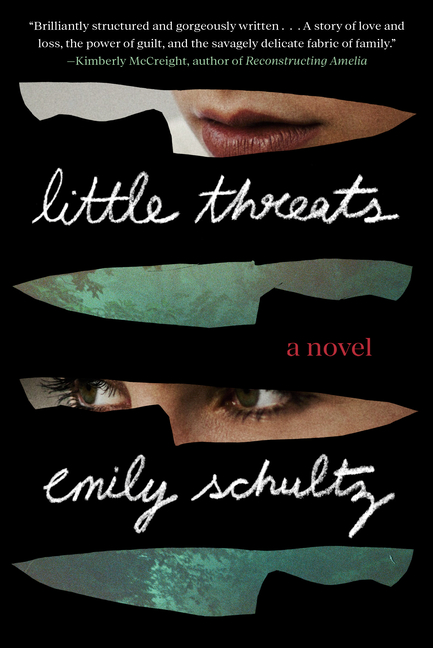 Both a whodunit and a haunting snapshot of the effects of a violent crime, Little Threats tells the story of a woman who served fifteen years in prison for murder. Now it's time to find out if she's guilty.

What The Reviewers Say
Rave Robert J. Wiersema,
The Toronto Star
... powerful ... reads with the clarity and promise of a quality true crime podcast — and I mean that as the highest of praise ... Schultz brings both sensibilities — the literary and the thriller — to Little Threats ... While it is a masterful slow-boil, with a palpable sense of menace suffusing nearly every scene, it is also a stark and realistic depiction of the traumatic legacy of violent crime and tragedy. Running throughout is a breathtaking evocation of the early 1990s and a powerful, conflicting female coming-of-age story ... Key to the book’s success, at every level, is Schultz’ skill with characterization. Her use of multiple narrative perspectives allows keen insight not only into Kennedy, Carter and their father, but of more peripheral characters. Each is powerfully drawn, complicated and conflicted, each harbouring the sort of secrets that might have claimed a young girl’s life, secrets that may claim yet more victims fifteen years later.
Read Full Review >>
Rave DOREEN SHERIDAN,
Criminal Element
... both a taut whodunit and a haunting snapshot of the effects of a violent crime ... features a delicately handled supernatural element ... That the repercussions of violence overshadow all the joy of Haley’s life is only one of the tragedies of this thoughtful novel that examines not only that particular milieu of the ’90s but also the aftermath, 15 years on, of a single night of violence ... Ms. Schultz brings her level gaze and compassionate prose to all these fallible people as they finally unravel the truth, evoking the eras she writes of with intimate knowledge and a cultural depth that will resound with anyone else who lived through them too.
Read Full Review >>
Positive Stephanie Turza,
Booklist
Fans of Tara French, Kimberly Belle, and Orange is the New Black will fall under this book’s spell ... Terse and tense, Little Threats investigates righteous anger, teenage angst, and the enormity of setting the record straight.
Read Full Review >>
See All Reviews >>
SIMILAR BOOKS
Fiction

A Will to Kill
Rv Raman
Positive
What did you think of Little Threats?
© LitHub | Privacy