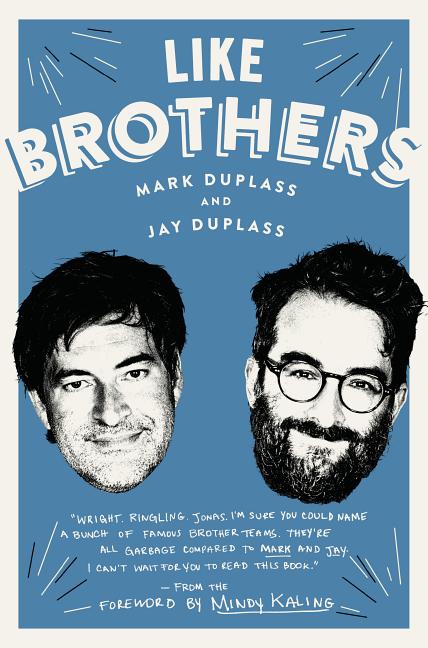 The seemingly ubiquitous filmmakers behind Jeff, Who Lives at Home, Wild, Wild Country, and HBO's Togetherness open up about their unlikely rise to fame producing low-budget fare, advice to aspiring filmmakers, and their interests and obsessions.

What The Reviewers Say
Rave Kristine Huntley,
Booklist
A thoroughly enjoyable peek into the brothers’ creative process, filled with tips and guidance for those who want to follow in their footsteps
Read Full Review >>
Positive Patrick Ryan,
USA Today
...the book playfully darts between personal essays, pop-culture tributes and self-help tips. Need 'unsolicited advice' about roommates, cars and the stock market? They have some. Wonder why Hoop Dreams and Dumb and Dumber rub shoulders on their best-ever movies ranking? They'll explain. While you don't have to be an aspiring filmmaker or cinephile to enjoy what they have to say, you'll certainly get the most out of Like Brothers if you are ... what sets Like Brothers apart from other celebrity essay collections is the uncanny bond between its authors. For those of you who don’t have close siblings, the Duplasses’ relationship may seem almost too good to be true, at times irritatingly so ... Like Brothers is ultimately a fascinating window into the creative process, showing the complexities that come with being so inextricably linked.
Read Full Review >>
Mixed David Itzkoff,
The New York Times Book Review
It’s a likable memoir of how Jay and Mark Duplass blazed their idiosyncratic trail, and an inspiring how-to guide for anyone who might wish to follow it ... Sure, there are also parts that seem extraneous or simply don’t work, but the Duplasses never pretend to be masters of their craft ... In episodic chapters, the Duplasses recount their upbringing in Metairie, La., and boyhood rites of passage like getting cable TV and a video camera to shoot their first movies. There’s a refreshing unpretentiousness to these sections ... Other sections, in which they compile and consolidate lists of their Top 10 films of all time, or imagine elaborate back stories for strangers they see at airports, may seem charming to devoted fans but felt like filler to me. More worrisome were passages in which the brothers, for all of their enthusiasm and desire to get others to participate in cinema, seem unaware of their inherent privilege as white men from a comfortable background, and who, as siblings working together, have an irresistible gimmick ... Still, it’s hard not to root for the Duplasses in moments like the one when their sales agent tells them they’re not allowed to attend the Sundance after-party for their film Baghead, lest it appear that they’re not engaged in heated efforts to get the movie sold.
Read Full Review >>
See All Reviews >>
SIMILAR BOOKS
Criticism

The Man Who Could Move Clouds: A Memoir
Ingrid Rojas Contreras
Rave
Essays

The World as We Knew It: Dispatches from a Chang…
Amy Brady
Positive
What did you think of Like Brothers?
© LitHub | Privacy