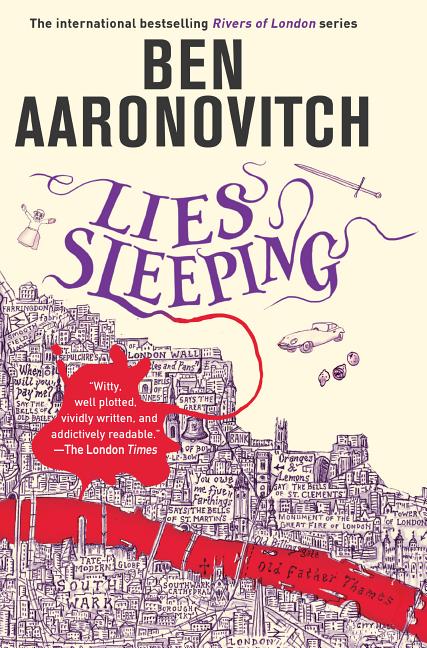 The seventh book of the bestselling Rivers of London urban fantasy series returns to the adventures of Peter Grant, detective and apprentice wizard, as he solves magical crimes in the city of London.

What The Reviewers Say
Positive Liz Bourke,
Tor.com
Peter Grant’s London has depth, breadth, and a complex array of recurring characters ... Aaronovitch’s Peter Grant has a distinctive voice, one that makes even the bureaucracy of regular police work engaging and compelling ... a tense, compelling police procedural with magic. As usual, Grant’s voice is striking, and the action gripping and intense. But while Lies Sleeping is generally well-paced, the pacing slacks off towards the climax, when Grant is temporarily taken out of play by his adversaries. This diminution of forward momentum at a crucial moment makes the climactic scenes feel somewhat rushed, a hasty—if explosive—conclusion to a dependably enjoyable story ... reliably entertaining.
Read Full Review >>
Positive Carolyn Cushman,
Locus
Things build to a peak with thrilling confrontations, an impressively weird final battle, and a big surprise at the end. If this were an American TV series, I’d say it was about to jump the shark, but Aaronovitch has a way with surprising developments, and I’m looking forward to seeing how things play out.
Read Full Review >>
Positive Kirkus
Recounted with deadpan British wit and irony ... packed with fascinating historical detail. Newcomers are advised, however, that the frequent references to previous events and episodes may prove confusing even as they enrich the context. The one aspect that lacks real depth is the magic, which is flatly Harry Potter–ish ... Lively and amusing and different.
Read Full Review >>
See All Reviews >>
SIMILAR BOOKS
Fantasy

Rabbits
Terry Miles
Rave
What did you think of Lies Sleeping?
© LitHub | Privacy