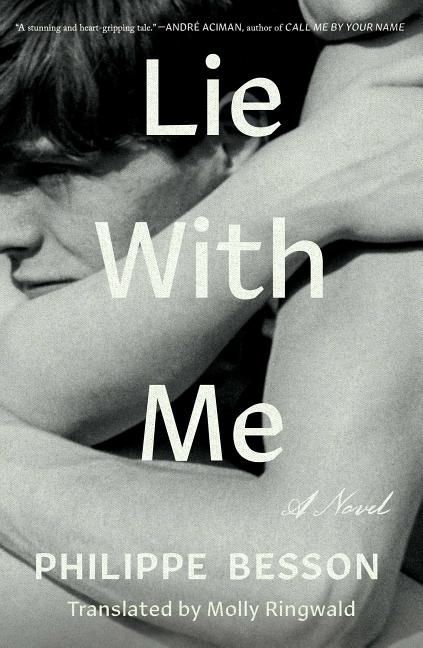 The award-winning, bestselling French novel by Philippe Besson set in 1984 France. Just outside a hotel in Bordeaux, Philippe chances upon a young man who bears a striking resemblance to his first love. What follows is a look back at the relationship he’s never forgotten, a hidden affair with a gorgeous boy named Thomas during their last year of high school.

What The Reviewers Say
Rave Hans Rollmann,
PopMatters
... equal parts poignant tribute and glaring warning ... it's unclear just how much of the narrative is novel and how much fact. As with all good literature, it doesn't really matter ... both banal and deeply thrilling ... It's a tribute – to first love, especially those first loves which prove immutable and enduring. It will resonate with anyone who has felt love, which is to say all of us. And it's a tribute to the 1980s, which this autobiographical novel conjures in all their awkward, awful innocence ... Despite the emotional restraint, the narrator is full of deeply felt and well-articulated feelings, and these emerge in his many reflective musings and asides. This glimpse at a character's interiority helped mitigate the repellent silence of their cool and tough exteriors. Indeed, it is those sparse spaces of deepest feeling that provide the story's most powerful and beautiful moments ... achieves a respectful balance, reminding us of the powerful and destructive impact of such attitudes, while implicitly hinting at the beauty of a better, more open way ... ultimately, it's simply a beautiful and poignant love story, a short and very French tale whose sparse, delicate prose is gorgeously translated by Molly Ringwald, retaining all of its heart-stopping power. If one can look past the tough-guy facades of the main characters – and Besson's vivid first-person narration does wonders at revealing the churning thoughts and repressed feelings hiding behind such exteriors – one can easily lose oneself in this gorgeously resurrected memory of '80s love, with all its awkward beauty and lost innocence.
Read Full Review >>
Positive Michael Schaub,
NPR
It's not a groundbreaking book, but it's certainly an enjoyable one ... Readers with a taste for innovative plots will likely be disappointed with Lie With Me. The storyline is a well-worn one ... Besson renders Philippe beautifully, though, giving the boy a real sense of self-awareness ... Lie with Me succeeds as a novel because of Besson's graceful writing, beautifully translated by Ringwald. Besson is a gifted stylist, and he infuses Philippe's story with the right notes of sadness and longing ... lovely.
Read Full Review >>
Positive Michael Kaler,
Lambda Literary
The work’s simplicity dissolves as the narrative unfolds, though, and it becomes clear that Besson’s written a thoughtful examination of the ways social class shapes the experience and memory of love ... [Lie With Me] brings to life the pain and endurance of a population that’s been suffering attacks on social welfare and living conditions for decades ... This kind of narrative’s well worn, and a large part of what makes Lie With Me memorable is the novel’s experimental form ... Molly Ringwald’s spare translation of the novel is moving ... Introspective and evocative, Lie With Me is an absorbing story about passionate love thwarted by class differences and homophobia. The slim novel takes on a great deal in a short amount of space and establishes Molly Ringwald as a skilled translator.
Read Full Review >>
See All Reviews >>
What did you think of Lie with Me?
© LitHub | Privacy