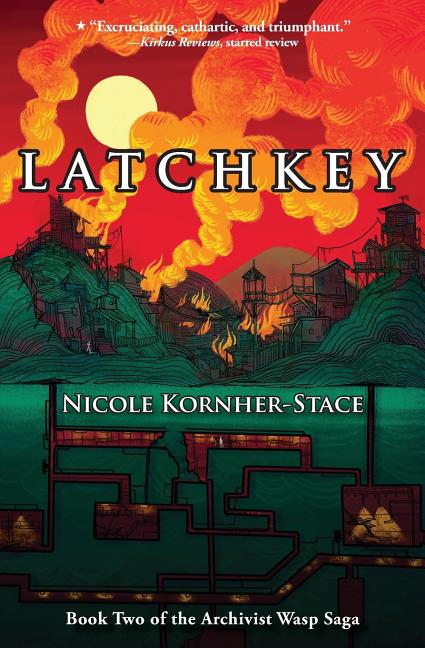 What The Reviewers Say
Rave Liz Bourke,
Locus
Latchkey‘s prose is elegantly self-effacing: smooth, easy to read, and full of adroit turns of phrase. Kornher-Stace has a gift for creat­ing atmosphere, from the familial closeness of Isabel’s small community of former upstarts in the Catchkeep-temple, to the ominous claustro­phobia of the tunnels beneath Sweetwater, and into the hectic chaos and turmoil of battle. And underwriting every moment is a core of kindness, of compassion – of choosing a path away from cruelty, even when it’s hard: a core that makes this book, for all its darkness, somehow funda­mentally uplifting. If I had to choose one word to describe this novel, it would be compelling: in its pacing, its characterisation, and even in its genre-blending approach to worldbuilding, it compels attention. I really enjoyed Latchkey. I can’t rec­ommend it, and Archivist Wasp, highly enough.
Read Full Review >>
Rave Tobias Carroll,
Tor.com
Nicole Kornher-Stace’s novel Archivist Wasp brought together a host of seemingly disparate elements that would normally clash and turned them into a bizarre and compelling coming of age story abounding with surreal adventures in a postapocalyptic landscape ... In both this book and its predecessor, Kornher-Stace has created and developed a singular fictional setting—but Latchkey is at its best when it embraces that originality, rather than returning to more familiar narrative beats.
Read Full Review >>
Rave Megan Crouse,
Den of Geek
Latchkey is a masterful example of sustained tension within story ... Some aspects of Isabel’s work are stated more directly in Latchkey than in Wasp — ghostgrass, briefly mentioned in the first novel, becomes a major tool here. The descriptions never become repetitive or encyclopedic, though. Fantasy elements are treated with stable realism, although some more description of people and objects would have been appreciated ... The ending, while it did have a dramatic choke-hold on my heart, was not as cinematic or climactic as the lead-up might lead one to expect, and that neat stack of tensions that ran throughout most of the novel loosens up toward the end ... Overall, the book is a haunted, beautiful landscape of humanity and the dead, a windswept field with no shelter from the weather, except when comfort is felt more as an absence of pain.
Read Full Review >>
See All Reviews >>
SIMILAR BOOKS
Fantasy

The Last Watch
J S Dewes
Positive
What did you think of Latchkey: Book Two in the Archivist Wasp Saga?
© LitHub | Privacy