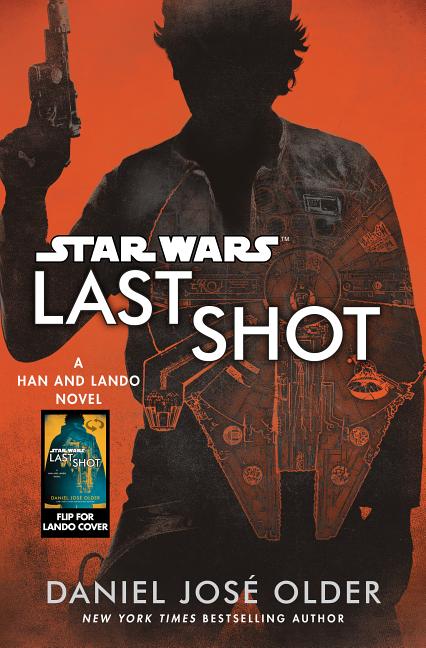 Han Solo, Lando Calrissian, the droid L3-37, and Chewbacca try to claim a prize for the discovery of a mysterious transmitter, but they must contend with its evil creator Fyzen Gor.

What The Reviewers Say
Rave Emily Asher-Perrin,
Tor.com
If you’re at all familiar with Older’s work, you’ve likely been excited to get your hands on a copy of this book—so stay excited because this is the most fun I’ve had reading about the galaxy’s greatest scoundrels since… well, Timothy Zahn’s Scoundrels ... The book is action-packed in all the right ways, and the plot is a fascinating one, too. It brings a lot of weighty galactic issues to light, particularly where the treatment of droids is concerned as mentioned above. The narrative manages to be full of life-threatening twists and turns ... I’ve said plenty, go read. Just read.
Read Full Review >>
Positive Gavia Baker-Whitelaw,
The Daily Dot
As well as being a characteristic Han Solo rollercoaster of chaos and disaster, it tackles some interesting questions about the role of droids in Star Wars ... Last Shot doesn’t go deep on Lando character development, maybe because we’ll see more in the upcoming movie. However, this isn’t really a problem because Lando is So. Damn. Fun. It’s exciting just to see more of him. Daniel José Older does a fantastic job of extrapolating on Lando’s relatively minimal screentime in the movies, giving a pitch-perfect portrayal of the slightly sleazy antihero we know and love.
Read Full Review >>
Positive Anthony Breznican,
Entertainment Weekly
Han Solo and Lando Calrissian are walking complications. When they tangle, they really tangle. When they’re friends, it gets even worse. In the new Star Wars novel Last Shot, now in stores, author Daniel José Older sets out to unravel their histories with a time-hopping tale of long-ago crimes and misdemeanors from their younger years that return to make trouble for them in middle age. ... Last Shot also explores topics that touch a nerve in our own galaxy — sometimes using humor, sometimes heart, and sometimes just by making it matter-of-fact.
Read Full Review >>
See All Reviews >>
SIMILAR BOOKS
Coming Soon