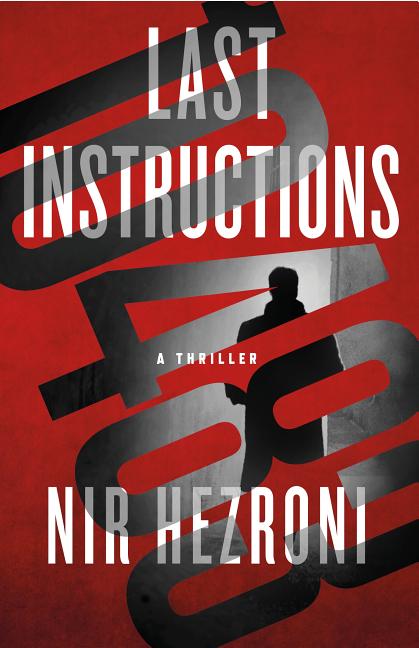 Agent 10483, a psychopathic former Israeli spy, is busy trying to shut down the spy organization he once worked for and plotting his revenge against the key individuals who he deems responsible for the Organization’s betrayal against him. Now, he's traveling the world in a quest to find a hidden nuclear warhead to use against them.

What The Reviewers Say
Positive Richard Lipez,
Washington Post
You have to wonder if Nir Hezroni’s consistently unsettling novel Last Instructions — about a rogue former Israeli intelligence agent bent on revenge — isn’t a little bit autobiographical. Hezroni worked in military intelligence before launching a high-tech career in Tel Aviv. And his portrayal of the Mossad — he just calls it the 'Organization' — reads as if some major score-settling is going on. Whatever the author’s motivation, his depiction of a spy agency run by bumbling, amoral fools isn’t going to be good for the brand ... The Bernoulli project, as the Organization calls it, is set in motion after a post-Soviet Union nuclear warhead in Kazakhstan goes missing and Israeli intelligence concludes that Iran has a bead on it. One of 12 scientists meeting in Switzerland knows where the nuke has been stashed, so the Organization, playing it safe, chooses to kill all 12. A group of assassins is programmed through 'transformations' in their brain chemistry to carry out the hits. One of them, Agent 10483, is inadvertently — or maybe on purpose — assigned three targets ... It’s worth making your way past the novel’s shakier elements to get to Hezroni’s big finish, a serving of dark comedy confirming that if this is how the defense establishment is going to keep us safe, we’re all in trouble.
Read Full Review >>
Positive Thomas Gaughan,
Booklist Online
Agent 10483’s psychopathy and his capacity for extreme violence are the very qualities that commended him to the Organization, an Israeli spy agency. Those qualities also spurred the Organization to induce multiple 'transformations' that would spur the agent to commit suicide. The final transformation nearly succeeds ... The Organization knows he’s coming for them, but 10483 is not only a psychopath—he’s also very smart and preternaturally goal-oriented ... Last Instructions, like its predecessor, offers an arresting premise and plenty of darkness, which will be enough for some espionage fans, but it may disappoint those looking for a faster pace.
Read Full Review >>
Positive Publishers Weekly
Hezroni builds on the characters and setup of 2017’s Three Envelopes in this nail-biter centered on the desperate efforts of an ultrasecret Israeli intelligence group, known simply as the Organization, to stop a sociopathic rogue operative. Many years earlier, agent 10483 was subjected to sophisticated rewiring of his brain that directed him to kill himself after completing a series of hits. The suicidal programming did lead 10483 to jump in front of a bus in 2006, but he survived, and after regaining consciousness almost a decade later, he embarks on an elaborate campaign of vengeance ... Thriller fans will be enthralled as well as disturbed.
Read Full Review >>
See All Reviews >>
SIMILAR BOOKS
Fiction

The Devil Takes You Home
Gabino Iglesias
Positive
What did you think of Last Instructions: A Thriller?
© LitHub | Privacy