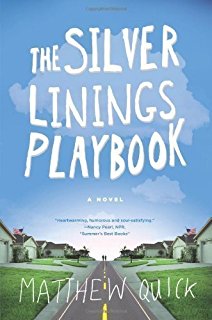 Pat Peoples has a theory: his life is a movie produced by God. And his God-given mission is to become physically fit and emotionally literate, whereupon God will ensure him a happy ending the return of his estranged wife, Nikki. (It might not come as a surprise to learn that Pat has spent several years in a mental health facility.)

What The Reviewers Say
Rave Barrie Hardymon,
NPR
The Silver Linings Playbook, Matthew Quick's much buzzed about debut novel, features a protagonist who is, for a change, earnestly doing his best to forge his way into adulthood … Pat is a fearless narrator; even his most outlandish delusions are so candidly expressed that the reader teeters between fear of heartbreak and the hope that Pat might actually yearn his way into happiness. It's a charmingly nerve-wracking combination … The book is cinematic, but the writing still shimmers. This nimble, funny read is spiked with enough perception to allow the reader to enjoy Pat's blindly hopeful philosophy without irony. After all, Pat's masculine ideal requires several traits that aren't always considered manly: kindness, wisdom, grace. You'll find it refreshing to learn that whatever the outcome, Pat's journey toward self-improvement is a silver lining in and of itself.
Read Full Review >>
Rave Stephen Barbara,
The Wall Street Journal
…[a] charming debut novel … Mr. Quick tenderly portrays Pat's small ambitions and the great obstacles he faces as he tries to keep his faith in silver linings. At home, his mother and father are having domestic troubles; his friends won't talk about his ex-wife. Worse, Pat can't seem to figure out why he split with his wife or how long he spent in the hospital … Mr. Quick guides the reader through the mounting tension — a braiding of hope, illusion, befuddlement and newly discovered truths. Not every cloud has a silver lining in The Silver Linings Playbook, but it is hard not to be moved by the fate of a man who, despite many ordeals, tries to believe in hope and fidelity, not to mention getting through another day with his sanity intact.
Read Full Review >>
Pan Catherine Taylor,
The Guardian
Pat is having ‘apart time’ from wife Nikki for unspecified reasons, although his uncontrollable rages drop a heavy hint. In anticipation of the ‘silver linings’ future when they will be reunited, Pat undertakes a manic exercise regime and reads the classics of American literature, searching for a happy ending. The ensuing send-ups of books including The Great Gatsby and The Bell Jar form the novel's wittiest passages. The rest is a schmaltzy, sentimental journey to recovery, all relayed by Pat in an irritating idiot-savant manner.
Read Full Review >>
See All Reviews >>
SIMILAR BOOKS
Coming Soon

Mount Chicago
Adam Levin
Mixed
What did you think of The Silver Linings Playbook?
© LitHub | Privacy