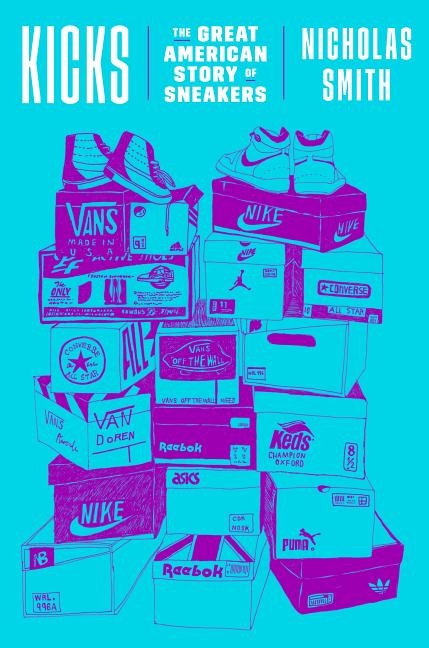 A history of the athletic shoe, or sneaker, from the beaches and croquet courts of the wealthy elite to streetwear ubiquity and, more recently, a collector's market for connoisseurs who call themselves "sneakerheads."

What The Reviewers Say
Rave Will Leitch,
The Wall Street Journal
Kicks serves as a comprehensive look at how much the sneaker became a signature indicator of cool, from Chuck Taylor and his Converse All-Stars to Clyde Frazier’s Pumas to Run-DMC and their Adidas to, of course, Michael Jordan. The Chicago Bulls great teamed with Spike Lee at exactly the right moment toward the beginning of each of their careers, launching Nike into the stratosphere with the simple phrase: 'It’s gotta be the shoes' ... Mr. Smith certainly doesn’t provide the shoe-makers a pass for their business tactics. The controversies over sweatshop conditions in some of Nike’s factories, for instance, are hardly given short shrift. But for the most part, the author tracks (if you’ll forgive the pun) the industry’s history in a breezy, light way that owes more to fun historical anecdotes than to hard data, but benefits all the more from the approach ... Mr. Smith himself is a 'sneakerhead' ... The most engaging parts of his book are those where he leans into that obsession, particularly with the book’s conclusion, which chronicles modern-day sneakerhead culture.
Read Full Review >>
Positive Ash Carter,
The New York Times Book Review
In Kicks ... the story of sneakers is, as Smith’s subtitle suggests, an American one: of humble origins and unapologetic success, of self-expression through consumerism and association with celebrity, of a product being put on a pedestal and a brand name serving as artist’s signature ... but it relies too much on contemporary sources ... He recounts the controversies surrounding the slavelike working conditions at overseas contract factories, but has little to say about the industry’s environmental impact ... Smith is not a 'sneakerhead' himself, and Kicks is not for the initiate. But there is enough material on the cult of the sneaker to satisfy most curious outsiders.
Read Full Review >>
Rave Stephen Phillips,
The Oregonian
Nicholas Smith’s Kicks...is a lively, engaging cultural history of a uniquely functional yet fetishized object—commodity footwear and consumer durable but also personal style statement, athletic talisman and coveted object of desire. Smith’s tale teems with freebooting DIY tinkerers, traverses the sociocultural trend lines of our time and runs smack dab through Portland ... Kicks will appeal to more than devout sneakerheads ... It’s a work of synthesis rather than substantial original reporting, but Smith is a skilled curator. He situates sneakers at the intersection of celebrity culture, the personal fitness movement, even globalization (describing the black eye Nike sustained in the 1990s following revelations about conditions in the Asian factories that then fabricated its sneakers) ... 'History is full of the outsized effects of seemingly minor events,' writes Smith. His history of sneakers is replete with them.
Read Full Review >>
See All Reviews >>
What did you think of Kicks: The Great American Story of Sneakers?
© LitHub | Privacy