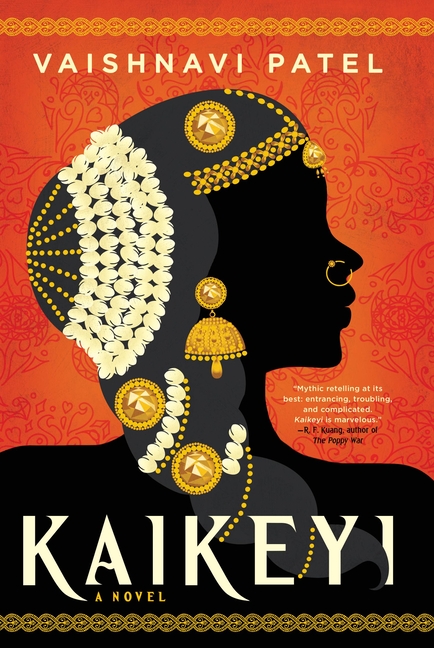 Reimagines the life of the infamous queen from the Indian epic the Ramayana, weaving a tale of fate, family, courage, and heartbreak—and an extraordinary woman determined to leave her mark in a world where gods and men dictate the shape of things to come.

What The Reviewers Say
Rave Elizabeth Hand,
The Washington Post
... a powerful, feminist retelling of the epic from the vilified queen’s point of view. A Chicago native and student at Yale Law School, Patel brings a no-nonsense approach to Kaikeyi’s story: Gods and magic play a subsidiary role to gender politics and a refreshingly warm depiction of relationships among the multiple wives and children in a sprawling royal household ... Patel’s vast tale unfolds at a measured pace, its careful depiction of one woman’s struggle to bring justice to an unjust world brightened by thrilling battle scenes and encounters with gods who have no concern with humans or their fates ... Patel resets the balance of power, creating an unforgettable heroine who understands that it isn’t necessarily kings or gods who change history but a disgraced woman who can look upon a group of girls and see 'a child, freer than her mother had been.'
Read Full Review >>
Rave Chika Gujarathi,
BookPage
... [a] bold reimagining ... For better or worse, the events of Ramayana unfold no differently with the reinvention of Kaikeyi’s character, but Patel’s changes certainly make the story much more engaging. Even readers unfamiliar with the ancient Indian epic will find a lot to love in Patel’s spellbinding details of mythological characters and ancient times.
Read Full Review >>
Rave Jaclyn Fulwood,
Shelf Awareness
... epic, exhilarating ... Patel does for Kaikeyi what Madeline Miller did for Circe in her novel of the same name, transforming a minor character cast by male storytellers as an antagonist into a strong, sympathetic woman determined to build 'a place where we could stretch our wings and belong.' Woven from a mixture of legends, ancient literature and Patel's own vibrant creativity, this spellbinding story of destiny, divine battles and family ties is intricate and action-packed.
Read Full Review >>
See All Reviews >>
SIMILAR BOOKS
Fiction

Kaleidoscope
Cecily Wong
Rave
What did you think of Kaikeyi?
© LitHub | Privacy