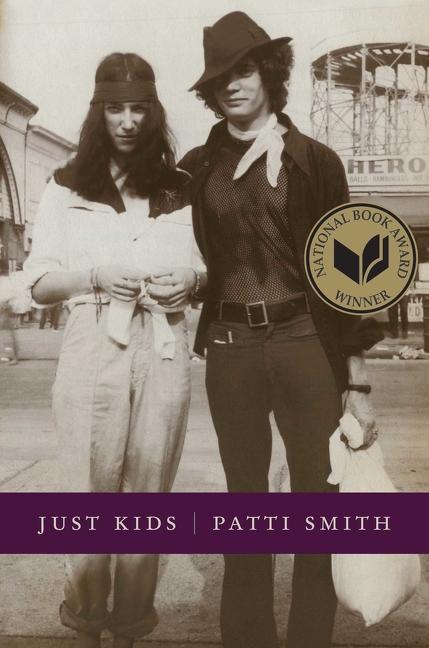 In this National Book Award-winning memoir, the beloved musician and poet narrates her move to New York as a young artist in the city's creative heyday and the complicated love affair and lifelong friendship she formed with the sui generis artist Robert Mapplethorpe.

What The Reviewers Say
Rave Tom Carson,
The New York Times Book Review
At one level, the book’s interest is a given ... The surprise is that it’s never cryptic or scattershot ... Just Kids is the most spellbinding and diverting portrait of funky-but-chic New York in the late ’60s and early ’70s that any alumnus has committed to print. The tone is at once flinty and hilarious, which figures: [Smith's] always been both tough and funny, two real saving graces in an artist this prone to excess. What’s sure to make her account a cornucopia for cultural historians, however, is that the atmosphere, personalities and mores of the time are so astutely observed. No nostalgist about her formative years, Smith makes us feel the pinched prospects that led her to ditch New Jersey for a vagabond life in Manhattan ... Most often, you’re simply struck by her intelligence, whether she’s figuring out why an acting career doesn’t interest her... or sizing up the ultra-New York interplay between the city’s fringe art scenes and the high-­society sponsorship to which Mapple­thorpe was drawn ... This enchanting book is a reminder that not all youthful vainglory is silly; sometimes it’s preparation.
Read Full Review >>
Positive Greg Milner,
Bookforum
Smith depicts herself not so much a scenester as a sober (in both senses of the world) observer. For all its period detail and depictions of semi-voluntary squalor, Just Kids is hardly a Please Kill Me-style tell-all, but it is a vivid portrayal of a bygone New York that could support a countercultural artistic firmament ... Like her music, Smith’s rarified idea of the Artist ('I did it for poetry, I did it for Rimbaud,') is occasionally grating, but much of the power of this book comes from her ability to recall lucid memories in straightforward prose. Even with all their relationship’s permutations (romantic, Platonic, maternal)⎯especially when Mapplethorpe begins to confront his sexuality⎯it comes off nearly devoid of melodrama. Just Kids makes a convincing case that faith in another’s expressive capability can form a bond as strong as any physical or emotional commitment.
Read Full Review >>
Rave Leah Greenblatt,
Entertainment Weekly
The reckless, splendid circus of New York’s royal bohemia in the 1960s and ’70s—rock idols, cowboy poets, Warhol Superstars—surrounds Smith in her heady recounting of a halcyon era ... a captivating memoir ... In her inimitable, lyrical style, Patti Smith [pens] a poignant requiem...and a radiant celebration of life.
Read Full Review >>
See All Reviews >>
What did you think of Just Kids?
© LitHub | Privacy