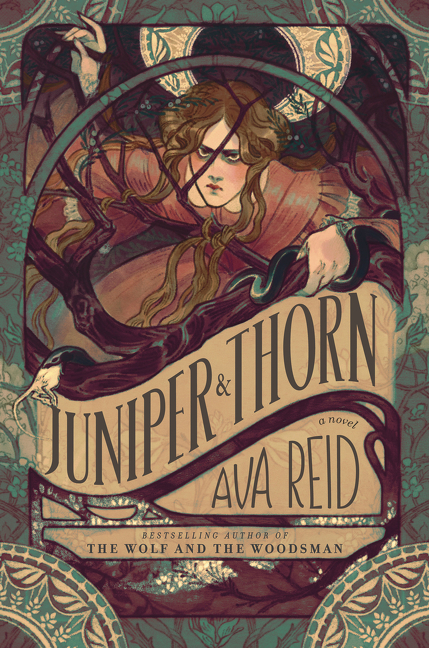 From bestselling author Ava Reid comes a gothic horror retelling of "The Juniper Tree", set in another time and place within the world of "The Wolf and the Woodsman", where a young witch seeks to discover her identity and escape the domination of her abusive wizard father.

What The Reviewers Say
Rave Emily M,
The Nerd Daily
... one of those books that buries itself beneath your skin and refuses to move. It has captured my mind entirely ... Reid has proven themselves as a stunning spell-weaver and I know I will need their next creation in my hands imminently ... this is a dark and heavy book but it is one that I will hold dear to my heart. Juniper & Thorn takes every last drop of tainted blood from the original fairy tales and weaves it into something entirely new, surprising and entrancing. Reid does not hesitate to really delve into the brutal reality of these topics. It is a difficult read at times, but it is one that challenges you and your assumptions around victimhood. This is a grotesque, stomach-churning book that constantly reminds you of the horror waiting to sink its teeth into you ... Reid stunned me into complete silence with this gory, gruesome and nuanced depiction of trauma wrapped inside a pitch-black fairytale. The writing was so gorgeously evocative and enrapturing, full of circling, labyrinthine details and tiny flourishes. It was full of darkness and despair, with a hidden monstrosity behind every line. This is razor-sharp, cut-throat writing that is relentless, yet you cannot tear yourself away. Reid casts their siren song over you and you are forever lost in this intricate, elaborate world ... a book that grabs you by the throat and refuses to let you go, digging in its blood-encrusted nails. Reid weaves the malevolent essence of the original tales with a heartfelt, emotionally raw and vulnerable depiction of trauma to craft something unforgettable.
Read Full Review >>
Rave Lacy Baugher Milas,
Paste
... in many ways, [Reid's] second novel manages to surpass her first ... Marlinchen’s journey is not an easy one. Nor is she always a particularly easy heroine to love. Her passiveness in the face of her father’s abject and repeated cruelty is stomach-turning at times, as is her seemingly boundless willingness to forgive him, which the story occasionally blames on the power of his magic, but I think is actually more all the more devastating if we assume it’s simply because abuse is a cycle ... A fairytale that reads much more like a warning label than a Disney fantasy, Juniper and Thorn is a pitch-black tale of trauma, abuse, and survival, set in a world teeming with literal monsters and monstrous men. And, yet, Marlinchen’s story is ultimately not a hopeless or unhappy one, despite the fact that its setting is grim and its pages full of death: At the end of the day, the long-suffering daughter still triumphs, though she must accept and even embrace the worst parts of herself in order to do so. (And carry scars that will never fully heal.) It’s a nontraditional happy ending, but perhaps that’s what makes it feel so right.
Read Full Review >>
Rave Laura Hubbard,
BookPage
Reid's prose is at times heavy and muted and at others soaring and poetic, contrasting Marlinchen's family home, the only world she has ever known, with Sevas' seemingly liberated life—a life Marlinchen desperately wishes to experience ... This combination of sweeping, emotional descriptions and scenes of tightly wound suspense brings to mind both Eastern European ballet classics such as Stravinsky's 'The Firebird' and Tchaikovsky's 'Swan Lake' and gothic horror like Shirley Jackson's The Haunting of Hill House—a juxtaposition that makes Juniper & Thorn an utterly compelling read ... Readers who would prefer to avoid themes of abuse and self-harm, as well as intense depictions of gore and body horror, should avoid Juniper & Thorn, since these elements recur with frequency. However, readers who are prepared for such territory will find a brilliant novel both tender and chilling, one that will challenge their ideas about monstrosity and magic and drag them from the depths of dread to the heights of hope.
Read Full Review >>
See All Reviews >>
SIMILAR BOOKS
Fiction

Shadows of Berlin
David R. Gillham
Positive
What did you think of Juniper & Thorn?
© LitHub | Privacy