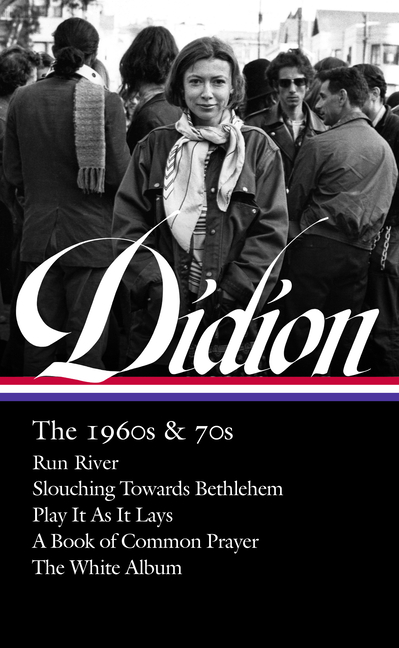 Collected in this first volume are Didion's five iconic books from the 1960s and 1970s: Run River, Slouching Towards Bethlehem, Play It As It Lays, A Book of Common Prayer, and The White Album.

What The Reviewers Say
Rave Lynell George,
The Los Angeles Times
... captures and revisits Didion’s seminal work ... readers can feel the prickly heat, smell the approaching catastrophe. Within her clean crisp sentences, this mirage of a destination shimmers up: the soil, the light, a tangle of deeply imperfect humans, all trying their luck, and then gone in a moment ... Weaving together intimate autobiographical elements, keen sensory observation, topical themes and major cultural shifts (or rifts), Didion arrives as a distinct voice in the era of New Journalism ... a defining compilation of her early writing ... When Didion addresses the reader in that confiding second person, those eyes peer, unblinking, at you. It is a writer’s seduction, a reporter working the moment to get at the most uncomfortable truth ... n the page her presence is striking and indelible, and it has been scrutinized and critiqued. Didion is indeed her own atmosphere and terrain ... For a region that to the outside world remains gauzy or improbable — still in many ways a mirage — Didion has worked to pin the complexity of Los Angeles, and by extension the West, on the page.
Read Full Review >>
Rave Hilton Als,
The New Yorker
Almost any page of this invaluable book will take you somewhere emotionally and offer a paramount lesson in the power of Didion’s voice ... Part of Didion’s genius was to make language out of the landscape she knew—the punishing terrain of California’s Central Valley, with its glaring hot summers and winter floods, its stark flatness, its river snakes, taciturn ranchers, and lurking danger.
Read Full Review >>
Positive J. Michael Lennon,
The Washington Post
As in the work of Tennessee Williams, whose affection for sultry weather and nostalgia for a mythical past are mirrored in Didion’s work, sexual activity in these three novels is roughly congruent with the temperature of the locale, although less so in her emotionally persuasive first novel, Run River ... A Book of Common Prayer, is the most complex and to my mind the least realized...[a] jagged, baffling flow ... [the protagonist's] listlessness reinforced my conclusion that Didion will be best remembered for her autobiographical nonfiction where she crisply parses and delineates her feelings and observations ... The two essay collections in this volume and her 2005 memoir The Year of Magical Thinking (not included in this collection), are where Didion gives the most, putting herself, firmly but gracefully, on the stage of the story and delivering her finest character.
Read Full Review >>
See All Reviews >>
SIMILAR BOOKS
Coming Soon