Joan: A Novel of Joan of Arc 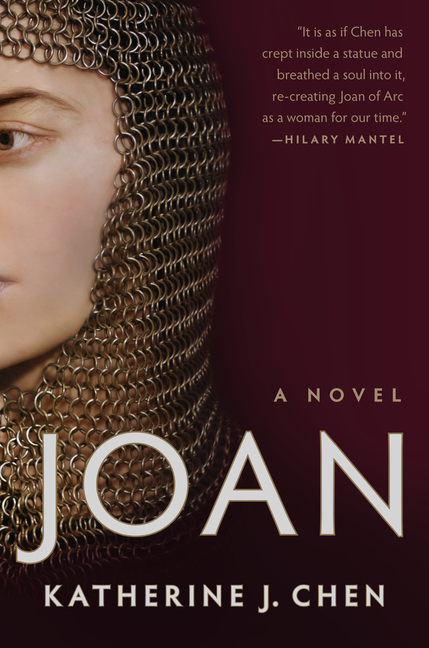 From the author of Mary B comes a reimagining of the epic life of Joan of Arc.

What The Reviewers Say
Positive Jess Walter,
New York Times Book Review
... affecting and adventurous ... Chen takes a lively stab, imagining the illiterate teenager as an abused child who uses her anger (and a remarkable tolerance for pain) to become an avenging warrior ... Chen’s solution is elegant and timely. Her Joan is just plain tougher than all those knights and noblemen, a born fighter who, as a child, recreates Agincourt with rocks, gets a bull’s-eye with her very first attempt at a longbow and is a preternatural genius at military planning ... Chen creates a rich, visceral world ... This is not your grandmother’s St. Joan. The usual tale of visions and visitations is portrayed here as merely a feature of the time ... by trading religious romanticism for the romanticism of war (especially as depicted by popular fiction), something profound gets lost ... The Joan of history is fascinating because she is enigmatic. To replace her inexplicable nature with a revenge plot is reductive. And to make Joan less mystic makes her less interesting ... The closest Chen’s Joan gets to reverie is the epilogue, when — captured, caged and headed for certain death — she seems more Mel Gibson than Ingrid Bergman ... It may not be the most nuanced portrayal, but if every generation gets the Joan it deserves, ours could do worse than an ass-kicking, avenging angel fighting simply for the right to fight.
Read Full Review >>
Rave Maureen Corrigan,
Wall Street Journal
Ms. Chen retrieves the worn fragments of Joan of Arc’s story and assembles them into a narrative that’s eerie, austere and just this side of plausible...To do so is no small feat ... The fierce conviction of Ms. Chen’s vision of Joan drives this historical novel ... As any chronicler of Joan of Arc must be, Ms. Chen is adept at describing physical violence; this wrist-breaking episode prefigures the breathless battle scenes to come ... Ms. Chen is equally skilled at charting how Joan’s sanctified reputation grows ... Novels that try to get inside historical figures we can’t ever know are most illuminating for what they say about their own moments. Ms. Chen’s Joan, unlike so many of her fictional and cinematic predecessors, is no gamine, no little Maid of Orléans. Instead, female physical power—undiluted by piety or conventional feminine attractiveness—is celebrated here ... Surely many readers will feel that Ms. Chen has summoned up just the Joan of Arc that this anxious, repressive age demands, even if her hope is not easily summoned.
Read Full Review >>
Positive Sarah McCraw Crow,
BookPage
Chen's often-gorgeous prose moves smoothly from Joan's village to the luxurious, treacherous French court. Throughout, Joan's musings on the hampered roles of women and peasants in a disorganized, beleaguered France are progressive yet still historically believable ... The novel features a large cast of characters, listed at the book's opening, and occasionally I had to turn to the list to remind myself about a character. For readers who love Hilary Mantel's Wolf Hall trilogy or Lauren Groff's Matrix, Joan offers similar pleasures with its immediacy and somewhat contemporary tone. It's an immersive evocation of a character whose name everyone knows, all these centuries later, but whom, perhaps, none of us knows at all.
Read Full Review >>
See All Reviews >>
SIMILAR BOOKS
Coming Soon

A Trail of Crab Tracks
Patrice Nganang
Positive
What did you think of Joan: A Novel of Joan of Arc?
© LitHub | Privacy