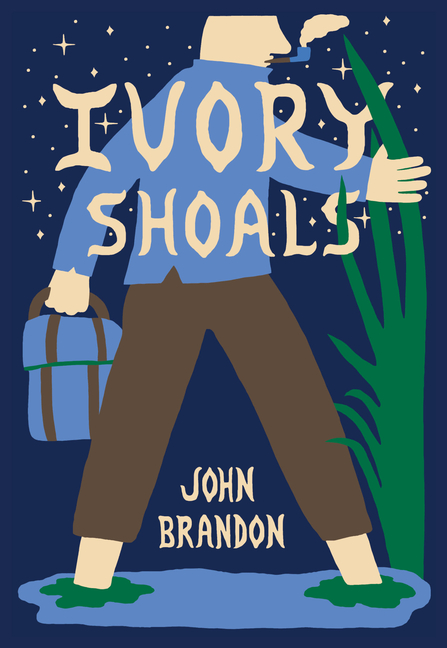 Twelve-year-old Gussie Dwyer undertakes to trek across the sumptuous yet perilous peninsula of post-Civil War Florida in search of his father, a man who has no idea of his son's existence.

What The Reviewers Say
Rave Kathleen Rooney,
The Star Tribune
... earthy vividness ... Brandon's fallen-Confederacy setting comes authoritatively alive ... This coming-of-age story continues [Brandon's] work in the vein of William Faulkner, Flannery O'Connor, Cormac McCarthy and Barry Hannah, tracking outsiders from society's fringes on odd and often gruesomely humorous quests through richly realized and treacherous landscapes ... Brandon was born and raised in Florida, and his lushly described terrain bristles with beauty and menace ... Cinematic and featuring a plot full of old-timey moral clarity where virtue and villainy delineate themselves sharply, Ivory Shoals is a gripping yarn that unfolds a tapestry of 'Humanity wicked as one could conceive, or as worthy.;
Read Full Review >>
Rave Colette Bancroft,
The Tampa Bay Times
... has echoes of many great books, but it has its own story to tell, and tells it with insight and brio ... The picaresque structure of the book lets Brandon move Gussie through encounters with many characters and settings. The author writes lyrically of natural Florida, even its perilous parts, in descriptions rich with detail ... Brandon gives us plenty of memorable characters ...a bracing mix of Florida history and fleet adventure, livened with dry wit and a tender regard for its characters. Take a walk across the state with Gussie — you won’t regret it.
Read Full Review >>
Positive Brendan Driscoll,
Booklist
... exuberantly narrated ... Brandon emphasizes period-specific detail and revels in old-timey turns of phrase, conjuring a lost world of rough camps, gunpowder coffee, and pouches of leaf tobacco. He’s interested in the Reconstruction era not as a frame for sociopolitical commentary but rather as a vivid, turbulent backdrop for Gussie’s path to maturity. But for all its Southern Gothic touches and action-movie fight sequences, the novel’s most powerful moments may be its lush depictions of Florida’s wildlands.
Read Full Review >>
See All Reviews >>
SIMILAR BOOKS
Fiction

Act of Oblivion
Robert Harris
Rave
What did you think of Ivory Shoals?
© LitHub | Privacy